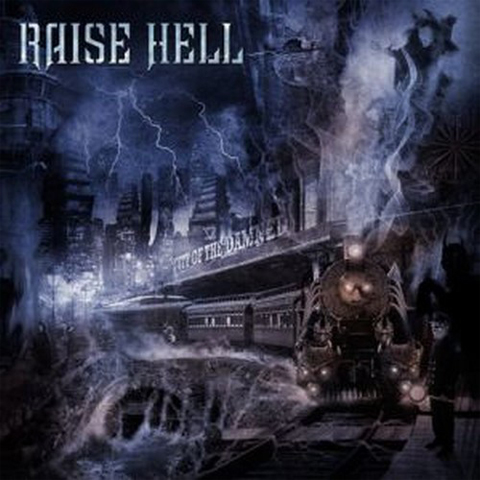 A phantom train zips across a doomed city line, and the fourth album from Raise Hell arrives, some four years after Wicked Is My Game. Some of this delay was likely due to a pair of line-up changes, and the acquisition of a new label after the deal with Nuclear Blast expired. Soon after the band released Wicked is My Game, Jonas Nilsson made the decision to hire a vocalist so he could focus solely on his guitar work. Honestly, you wouldn’t notice, since the studio guitars here are hardly more complex, so it must have been a live gig decision. The new vocalist is Jimmy Fjallendahl, and while I don’t enjoy his vocals nearly as much as Nilsson, he’s at least got the right type of approach, a caustic snarl that fits in well with the spooky horror show thrash that the band have continued here from the past two albums. The other change is Joakim Kulo joining the band to replace Torstein Wickberg, who departed in 2004. Raise Hell is one of those band that change their style from album to album so you’ll never know what to expect when their new one arrives and I must say that im positively surprised to hear such a great album. Death Metal is pretty much gone now, but none of the old fans should leave their backs to the band. The songs are melodic, but still heavy and fast. I never thought Raise Hell would be able to release such a varied album. The mid-tempo-based title track knows to enthuse as well as the faster up-tempo-stuff like ‘Devils Station’, ‘Open Your Mind’ and the double-bass-banger ‘My Shadow’. City of the Damned is actually a better album than Wicked is My Game. Those who wrote the Swedish guys already off should give ‘City Of The Damned’ a try and Raise Hell another chance. Even Power Metal-fans could like this one. Changing their musical style isn’t always bad.