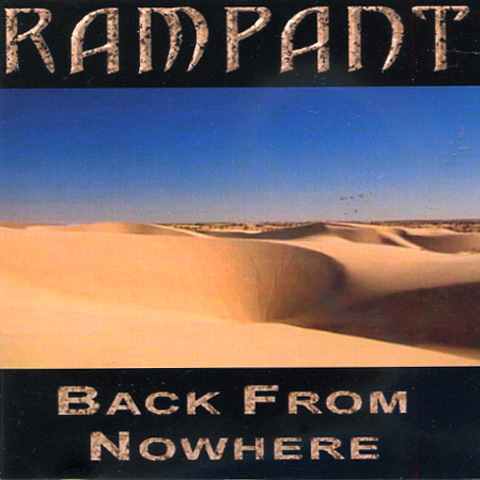 Rampant -Back From Nowhere cd

The story of Rampant goes as far back as 1982 when a some kids from Köping, Sweden formed Ambush. This is the same band that released the great 4-track single Run Like Hell on Aktiv Musik in 1984. This four tracker was a great release and after the single the band decided to ad a keyboard player, Juba Nurmenniemi from Darxtar, Öresund Space Collective. With this line up they recorded the Dont Your Back On Ambush album that was released on cassette only. This however would be the end of Ambush as guitarist Åke Cromnow and vocalist Ronny Starborg formed Rampant who debuted with tracks on another rare cassette only release, namely the Hardrock compilation, also on Aktiv Musik. Afters some demos and gigs the band disappeared. In 2001 Cromnow and Starborg wanted to give it another try and kicked Rampant back to life again. During the following three years the band jammed on their old tunes as well as working on new material. Then in late 2004 they entered the Balans Studio to lay down their debut album, Back From Nowhere. The album was released privately by the band in 2005. This is 80s melodic hardrock done with a very high quality. Fans of Swedish melodic hardrock should check this out.