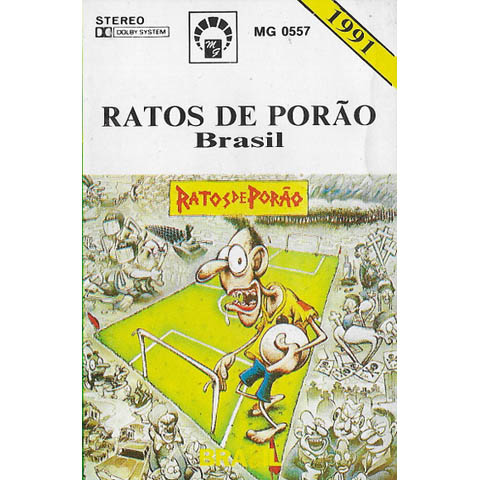 Poland is probably the country that had the most record labels in the world that only released cassettes. But even though there were lots of labels the market was still small as they only printed these for their own market inside of Poland. And a label in one town maybe lacked the distribution for another town and so on. A Warzaw or Krakow label might print more copies of a tape then labels from a smaller town. So even if there are thousands of releases you will notice how rare some are if you start to try to list the catalog number of one particular label. Some cassettes just rarely shows up. One of the bigger cassettes labels were Takt Music in Warsaw and another one was MG Records, which was a sub-label of GM Records (both used the same logo during the early 90s). Just like Takt they started in 1990 and existed up until 1994 and during those 4 years they released approx 3000 tapes. Under the name of GM Records they started a pressing plant in Poland after these cassette years was over.

Dispensing hardcore punk, grindcore, and metal since 1981, Ratos de Porão (Basement Rats) are one of Brazil’s longest-running bands. Compatriots Sepultura count RDP as an influence, covering the title track from 1984’s Crucificados Pelo Sistema, reportedly South America’s first-ever hardcore punk album. Brasil, RDP’s first record for Roadrunner, found the band moving from hardcore punk to a thrash-tinged crossover hybrid. Quite simply, Brasil is one of the finest crossover albums ever recorded. The songs are short, direct, and deadly, welding the basic chords of punk to the frenzied picking of thrash. “Drink Til You Die,” for example, combines a I-IV-V progression with machine-gun riffing. The barbed guitars in “SOS Broken Country” and “Suicidal Heroin” sound like exploding shells. Drummer Spaghetti pushes the beat with Dave Lombardo-esque abandon, while vocalist João Gordo screams with commanding authority. Despite its grittiness, the record has surprising sonic variety. Keyboard swells, hip-hop scratches, clean tones, and handclaps pop up like booby traps, then disappear. This is the version with re-recorded vocals in English.