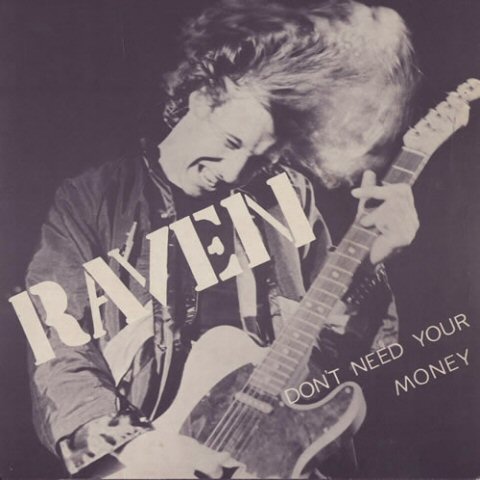 An early and influential band in the New Wave of British Heavy Metal movement, Raven were a group whose lean, tough sound helped anticipate the rise of thrash metal, though they preferred to describe their energetic and physical sound as “athletic rock,” inspired in part by their habit of wearing sports gear on-stage. When they were given the opportunity to release their first single through the generosity and prudence of the Tygers of Pan Tang manager, who saw the band perform and was naturally impressed, the members of Raven had to make the difficult choice of selecting a song to turn into a single. Perhaps wisely, they chose a relatively tame song for their standards, which still included every idiosyncrasy the band would become known for. The hyperactive vocals, fast riffing and mean drumming are present; but the mold is a simple hard rock song. Why this didn’t become a classic track I do not know, as it easily beats many of the conventional hard rock “classics” – Born To Be Wild has nothing on this. The band had been playing for years, both in the line-up on this single (which they retained for six studio albums) and earlier line-ups, featuring an extra guitarist and several different drummers. The first seeds of the material featured here and on the coming two albums were planted back when vocalist and bassist John Gallagher and guitarist Mark Gallagher were merely young teenagers. Their absolutely smashing drummer Rob “Wacko” Hunter joined them far later, but finding him must be one of the greatest things to ever happen to the two brothers. The man was a mean machine, giving us the greatest drumming ever heard on NWOBHM tracks. Don’t Need Your Money is the perfect single for a NWOBHM band. It starts with a simple A-flat riff, repeated an octave higher before returning to the root. It’s a perfect fast, driving riff, which is build up by bass and drum accompaniment before the vocals kick in. They feature John Gallagher’s completely crazy vocal style, which was crafted to perfectly accentuate the band’s restless and wild style. Classically trained, he bellows and screams and sneers with his thick Newcastle accent in a very charismatic manner. The song is a punkish anthem about refusing money from some sort of authority figure, mockingly called “honey”. “I don’t want no rich fat daddy trying to change my life when I just want to relax”, as John shouts in the penultimate moment of the chorus, which is left to the audience in live performances. To take this sort of stand in the soul-crushing Newcastle, in which few escaped from the daily grind which slowly pulverized their souls, was almost necessary. It was their way to cope with the dire conditions. It remains an appealing plea for sympathy. Don’t Need Your Money is unbelievably fun to hear and to sing along to, which is its chief virtue. I sing this while I work, while I am dressing, while I shower, while I am driving or cycling, even while I am merely walking around the house or a building.. It never leaves me. Out of Raven’s entire catalogue, this one song has probably received the most air play, and that is just. It is energetic and frenetic without being too “out there”; a perfect introduction to the band’s material. Wiped Out, featured on the B side of the single, has possibly the most catchy riff I have ever heard in my life. This is the sort of thing that makes people want to run and grab a guitar so they can play around with it themselves. It is so instantaneously memorable that it is suitable for heavy radio play. Normally I am not too fond of “catchiness” as a standard of good music: every silly note sequence can be catchy, but that says little about its actual quality. It sticks to the mind, sure, but what sticks remains far more important. In rare instances like this, however, the riff is so amiably unforgettable that it is sufficient on its own. Of the two songs on the single, Wiped Out is the more daring. It’s a little longer, a little crazier. John’s scream are a little less controlled too. Unlike Don’t Need Your Money, it isn’t as flawlessly functional; but it certainly still rocks. “You’re gonna be wiped out” they shout – and they stuck to their promise. The band has wiped me out numerous times. Even the solo is very good: not only does Mark Gallagher give us amazing playing, it is also backed up by unbelievably good drumming. For a first 1980 single, the audio quality is great. The raw quality fits the band, and everything comes out relatively clean. The drum sound may be a little annoying to a few people, but the astounding quality of it saves it from becoming a very big nuisance. This is how Raven first presented themselves to the world, and it is no surprise they would briefly achieve a legendary status among followers of the NWOBHM.