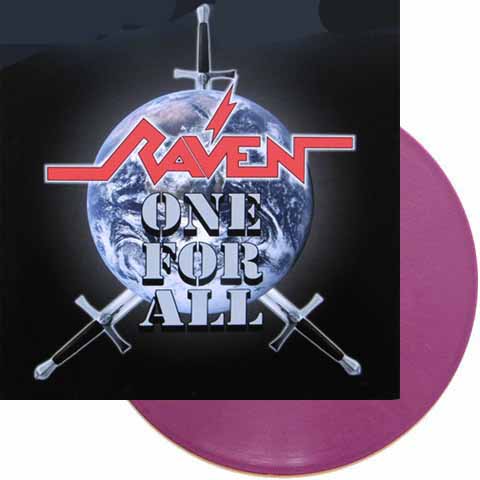 Raven -One For All lp [purple]

Raven finished off the 90s with another studio album, ‘One For All’, released in Europe in late 99 via Massacre Records and 2000 in the U.S. via Metal Blade. This was the first Raven album in quite a few years that was not self produced by the band. Instead, their old friend Michael Wagener (who had not worked with them since the ‘All For One’ and ‘Stay Hard’ albums) was behind the boards. Having worked so well with the band previously, Wagener obviously knew the band’s strengths, and he polished them up while knocking off a few rough edges. Therefore ‘One For All’ sounds a bit more focused and perhaps a bit leaner and meaner than ‘Everything Louder’ or ‘Glow’. The album kicks off with the hyperactive ‘Seven Shades’ (which comes from a Geordie expression when someone’s about to get beat up – they say they’re going to ‘kick seven shades of sh*t’ out of them) and cruises through another eleven bouts of good ol’ fashioned Raven lunacy. The speedy, catchy, upbeat numbers like ‘Double Talk’ (inspired by the mountains of record-label bullshits. Raven has had to put up with over the years) and ‘Get Your Motor Running’ (a ‘car song’ similar to ‘The Pack Is Back’ ‘Nightmare Ride’) are balanced out nicely by a couple of slow, brooding pounders like ‘To Be Broken’ and ‘Last Ride’. As ever, Mark Gallagher is in fine guitar-maniac form, and John’s bass abuse and squealing vocal style sound just as youthful as ever. In other words, ‘One For All’ is yet another solid Raven platter. Unfortunately, just as things appeared to be on the rise for Raven again, the band hit another roadblock after the release of ‘One For All’. While working on a remodelling project at his home, Mark Gallagher’s legs were severely injured when a wall collapsed on him. Obviously all band activities stopped while Mark underwent a long recovery process, placing Raven on a forced hiatus while Mark endured a series of operations and physical therapies in order to save his legs. Raven would not make a return to the metal scene till the mid-2000’s (and even then, Mark’s legs were still in braces during the band’s first few tentative live shows) but thankfully he eventually made a full recovery. ‘One For All’ ended up being Raven’s last studio album for a decade and it’s a great one. In fact, you can’t help but listen to such standout tracks as “Kangaroo,” “Seven Shades,” and “Double Talk” and wonder what would have happened if Raven released an album along these lines instead of such slip-ups as Stay Hard and The Pack Is Back back in the mid-’80s.