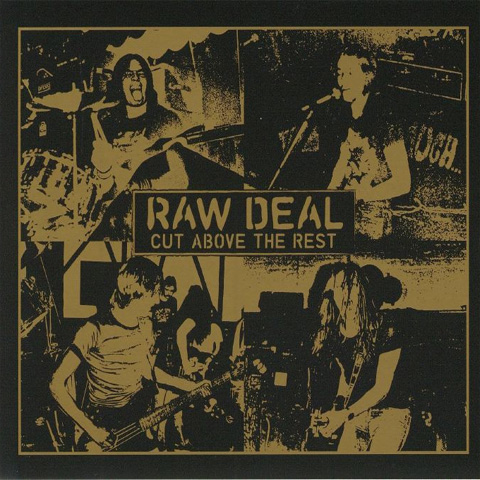 It is not often that a band starts out with three guitarists and a drummer, but this happens to be the earliest formation of Orpington, Kent based NWOBHM unit Raw Deal. At the tail end of summer 1978, sticksman Steve Richardson and guitarists Paul Reynolds and Brian Smith showed up at a rehearsal of a local band called Phobia. Next thing, they were jamming on the band’s equipment with Phobia guitarist / singer Rob Childs joining in. A few days later, Rob became the fourth member and the third guitarist of a band without a bass-player. As Rob recalls, “It seemed like a good idea at the time as three guitars are louder than two guitars”, but the realisation of having no bass-player soon kicked in. With Rob also handling the vocals, the search was on for a fifth member to complete the band that now also got its name, Raw Deal, inspired by a newspaper headline. In late 1978 Ade Jones joined Raw Deal – if only for a short period of time – contributing the bass lines to the first documented material of the band. This came in the shape of the unreleased “Make Or Break”, and the rough and ready, “Cut Above The Rest” that captured the raw energy of the early generation NWOBHM bands, taped ‘live’ on a 4 track recorder at the ‘Mouse Hole Studio’ in Orpington with the vocals added later. There’s been some misconceptions about the cheering at the end of “Cut Above The Rest”; this actually is the band being relieved to finally get the song right since it had been a rushed recording session. From this recording, “Cut Above The Rest” was then lifted to appear on the much sought after “Kent Rocks” compilation album, released in 1981 by the obscure White Witch record label in a circulation of 1000 copies. After the recordings and only a few gigs, Ade was out of the band, and it was there and then that Brian switched from rhythm guitar to bass. Around that time, the band was putting together a lot of original material, including a song written by Paul called, “Destruction Derby”, but somehow never officially materialized due to lack of finances even though it was well received at the frequent shows that were mainly concentrated in the Kent and South East London area, and crowned by support slots for bands such as Tank and Alkatrazz. As drummer Steve remembers it; “We were four young guys having a blast and playing plenty of gigs but not really making enough money to pay for studio time”. In the summer of 1981, the band recorded two more originals; “Out Of My Head” and “In The Mood” that were coupled on a 7” single by the very same label that issued the “Kent Rocks” compilation. This was triggered by a flow of people visiting the label owner’s record shop, enquiring if more Raw Deal material was available after having heard “Cut Above The Rest”. The single, financed and released by White Witch records, was issued without a picture sleeve and pressed in a run of 1000 copies that were mostly sold at gigs. So now the band had their official recordings in place, only to find themselves restricted by any proper promotion or involvement from the label, whose promotional highlight in favour of the band was the “Kent Rocks” launch party at ‘The Woodman’ in Blackfen where Raw Deal played along with The Gerry Scales Band and jammed with other featured bands on the album that were attending the show. Although Raw Deal did well in the live scene, a number of factors were against the band morphing into a next level act, with Paul departing, the general view of certain record companies that the scene had been saturated, and in essence, “Time to move on to something else” as Rob words it. Consequently, this led to the demise of Raw Deal in 1982 with its members going separate ways to pursue their musical aspirations in other bands. As Rob acknowledges; “We had wished to have recorded more originals at the time, as there’s been all sorts of cassette recordings and rehearsals tucked away somewhere”. Now these tapes have been remastered and restored and the band have put together a compilation abum that really is a slice of NWOBHM that truly is “A Cut Above The Rest”.