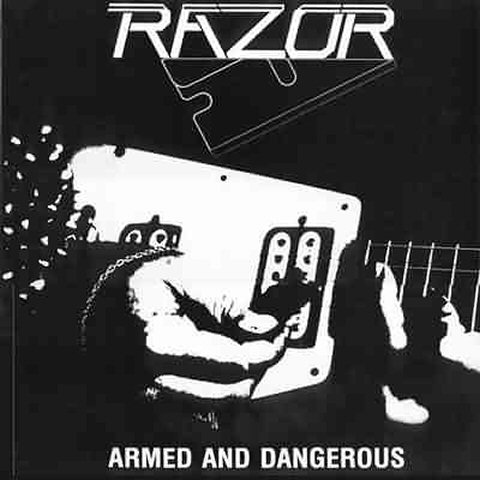 feel the white hot metal, feel it burn your skin, experience the torture, pay for all your sins

These seven tracks are an early-stage aural portrait of what the four-piece will do for the rest of its existence. Unlike a band such as country mates Voivod who would transmogrify into something more abstract and otherworldly with each and every subsequent album, Razors dial never clicked to a different network, never faltered in their quest for thrash dominance. These tracks resemble the production value and thinner thrash delivery that’s featured on Executioners Song rather than Evil Invaders where thickness like swamp water soaks the tracks and the band starts the ascent into their own legendary status. Four of the tracks here are featured on the bands debut full-length. Its easily noticeable that traditional elements in Killer Instinct and Hot Metal overtake the thrash vehemence that is just clawing to escape, meanwhile the longer title cut possesses one of Sheepdogs most feeble screams, a mere kitten compared to the masters of the hunt on Evil Invaders that have a tendency to set steel afire. The first true stroke of thrash mania ignites with blue flame appeal in Take This Torch and an opening riff of frantic, flesh-peeling proportion that cannot be overlooked. The chorus fans the flames into a screeching inferno while McLaren unleashes screams more akin to his seminal lungs. It’s a quintessential thrash song that (obviously) doubles as the best track on the record and was chosen to punt Executioners Song into orbit.