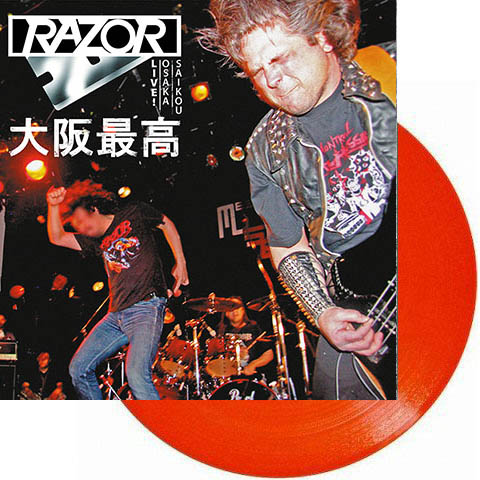 Razor formed in 1984 in Ontario, Canada. Over the decades they have become one of the most legendary North American Thrash Metal bands developing their own unique sound. After so many years, “Osaka Saikou” is the band’s first-ever live release and Dave Carlo is really happy about the record and Razor’s trip to the land of the rising sun: “Yes, it’s our first official live release. There are some bootlegs out there from the past. And yes again, it was our first-ever trip to Japan as well. These were special festival performances (two days) in Osaka, Japan. That was the full extent of the trip. The Japanese trip was great for us as we had the opportunity to not only perform but to see some of the surrounding area. The culture of metal is very intense in Japan. The society seemed to place a great emphasis on respect, which is something we thought was awesome. The Japanese fans were of the highest quality in terms of intensity and enthusiasm!” According to Dave Carlo, there was a special meaning behind choosing the album title: “’Osaka Saikou’ translates to ‘Osaka Awesome’, ‘Osaka Supreme’, or similar sentiments. Basically we are saying that Osaka is great! Razor definitely loves Japan.” All in all, »Osaka Saikou« contains 13 songs, was it hard for Razor to choose the actual set list? “Yes, it is always difficult to reduce so many albums to a brief amount of time,” says Dave Carlo. “But we tried to put across some of our personal favourites as well as the classics that people want to hear. I cannot ever imagine performing without including ‘Evil Invaders’, so that must be the most popular Razor song of all time. There are some songs that always have to be in the set list. And most of those found their way onto »Osaka Saikou«. I suspect Razor fans like the high energy of our traditional sound, so we would not likely be too experimental in the live environment.”