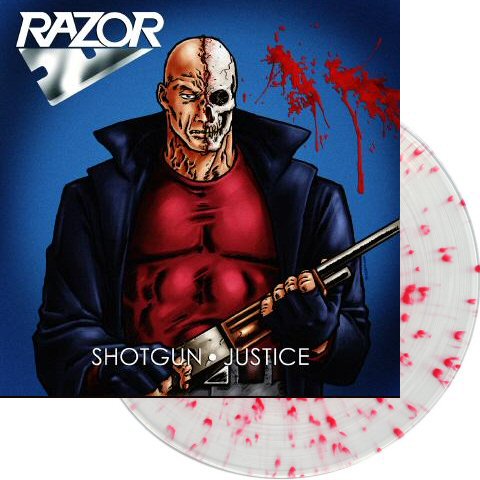 ‘Shotgun Justice’ was originally released only on CD in 1990 on Dave Carlo’s own label Fist Fight Records (and distributed in North America through Fringe Records). It was the first Razor album featuring their then new vocalist Bob Reid. Amongst Razor maniacs there still is an ongoing debate about who is the ultimate vocalist of the band: Original singer Stace McLaren, aka Sheepdog, or the ‘new guy’ Bob Reid? Is there a big difference between the two anyway? Dave’s answer comes from the heart: ‘Good question, good question! My comment to this would be: If you historically look at bands that have changed their singers, people usually don’t like the replacement singer as much as the original guy. It just works out that way. I don’t know why. Iron Maiden is an example. I always preferred Paul Di’Anno to Bruce Dickinson. With Black Sabbath I have always preferred Ozzy Osbourne. Longterm fans of bands get attached to the original voice of that band and they can’t look past it. And if the first singer had a great voice, like Stace had, it becomes so much harder for people to look past it. We have to face the fact that Razor had a great original singer: Sheepdog. He did a great job with the band, he is a great singer. What bothers me is that people get blinded by that and they don’t give Bob Reid a chance. If I had started Razor with Bob Reid in 1984 and nobody had heard of Stace, Stace would never have become the singer. I think people would have been very appreciative of Bob Reid. If I would now go back to working with Stace again, and stop working with Bob Reid, which by the way could happen, if that were to happen, I am positive that people would then start to compliment Bob Reid and like Bob Reid. As soon as they would know that Bob Reid is not singing on Razor albums anymore, they would go: ‘Oh, we liked Bob Reid.’ The truth is, I don’t think Stace would have been able to sing on ‘Shotgun Justice’. And for a lot of people that album is a real classic. The reason why Stace could not have done it is the hatred that is put across on that record. That kind of aggression was just more suitable to Bob. I wrote ‘Shotgun Justice’ for Bob’s voice. So that record couldn’t have existed without Bob as a singer because part of my ability to write that album came from my knowledge of who my singer was. I hope that makes sense to you. Both Razor singers are great vocalists. I could work with either one of them. I just want the fans of the band to be glad that I made five great albums with Stace. Nobody knows what the future will hold. But I also made three great albums with Bob Reid. And I might make more great albums with Bob. But whoever I make them with, it’s gonna be good’.