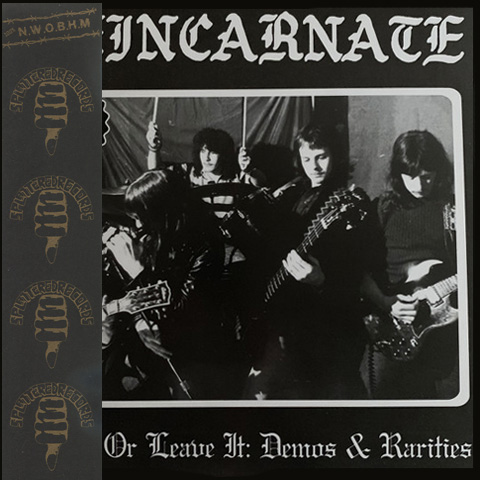 Reincarnate ‎–Take It Or Leave It lp

Reincarnate was one of those many NWOBHM band that released a vinyl single but never managed to get a record label and release a full length album. The band was formed in Stoke-On-Trent back in 1980 and they recorded a four track demo in 1981. This demo was sent around to labels, clubs, magazine etc. The only thing it lead to was that the local radio station Radio Stoke got interested and took them in for a radio session in 1981. In 1982 they released their Take It Or Leave It vinyl single on the small Zipp records in a limited run of 500 copies. A year later the band fell apart and bass player Paul Faza Farrington went on to Harrier, and 20 years later he became keyboard player in Demon. This album is the first official reissue of the demo and single for almost 40 years. Here we have the complete demo and single material so a total of six tracks is what we get and if you love Nwobhm then you dont really want to miss this. The two single tracks are both under 4 minutes in length but has everything a good tune from this period need, galloping riffs and straght on tunes. Not trying to be technical, progressive, flashy but just basic stripped-down songwriting that makes you smile. With a singer that sounds like a young Kevin Heybourne, of the mighty Angel Witch, you just need to wonder why this band never got signed. Was they just late to the party? Maybe if this had been released in 1979 or mid 1980 then history could have been different. Or should they have added some occult lyrics to their music? Who knows. Sure the material here is a bit more upbeat than Angel Witch but something that Nwobhm fanatics need to check out.