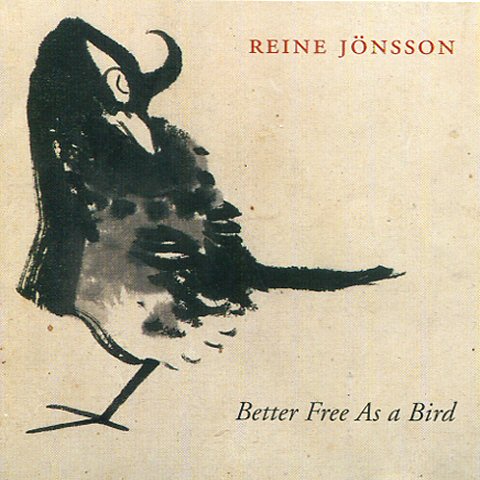 Reine Jönsson has maintained a very personal line in his compositions. He wants to be open for whatever ideas that pop ups and doesn’t want any structures or limitations to come in his way. The opening track “Liv Och Död” (Life And Death) on his 2001 album “Better Free As A Bird” features a sound of rustling bamboo sticks. The track comes entangled in a many-colored tapestry, in which you can find passages of Terry Rileyish string quartet atmospheres (“Salome Dances for Peace”) and Baltic minimalistic affinities with repetitious chamber games by Osvaldas Balakauskas and Peteris Vasks. All these nuances in Jönsson’s music never reach the state of sampling or plagiarism, or even imitation. Instead they reveal the musical fingertip sensitivity of a very knowledgeable composer, who is catching the wind and putting it in the score – from where the result rises in radiant vibrancy in the beauty of the musical moment. Its easy to be amazed and startled by the richness in his music. “Om Hjärnan” (“About The Brain”) (1999) is the concluding piece on this magnificent album. This long concept work (37:02) is derived from the novel “Den Gröna Teorin” (The Green Theory”) by Matti Bergström, which initially describes the human brain to the layman in poetic imagery. The title sections are directly imported from the titles of the chapters of the book. Jönsson, however, states: “The titles of the chapters remained with me, but the music took the lead. […] When I start playing [in the sense ‘playing a game’ or ‘playing like a child plays’] no constructions or sententious thoughts are submitted to.” I feel insignificant on trying to convey this music through language, since the multitude of expressive gestures and introspective impulses is immense, and I can but marvel at this artistic temperament, hitherto basically unknown to me, but amply revealed to me through this multi-layered game around a game, which eventually spirals way into the inner space of self, touching on the very basis of perception, in a peripheral sense of rising through the ages at warp speed, while simultaneously remaining at rest in this steady flow of prismic splendour of Reine Jönsson’s music.