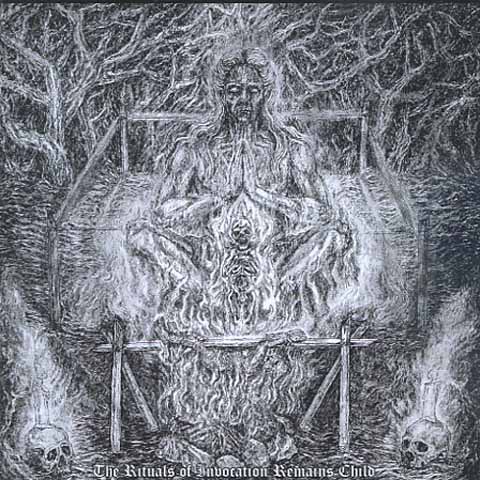 Religion Malediction from Bangkok formed several years back, producing a demo, split and EP before putting out The Rituals Of Invocation Remains Child – one of the most engrish titled albums I’ve heard in a while – as their debut album. The band features two members of Shambles, who I know through their Black Candles Magnetic Doom demo on Ancestral Terror Productions, and three shared members of Lotus of Darkness – an offshoot of Religion Malediction. The name of the conflict here is raw black metal. There isn’t really any disguising the aim of the band. There is no obviously shrouded attempts at being original… just hateful cold metal negro. Issara’s guitar tone should be a primary focus; it’s very thin but tonal clarity is superb and frigid. Unfortunately, the guitar is set back in the mix like morality in Dennis Rader’s mind. I would have liked to hear the guitars a little more pronounced, but the atmosphere produced by having them distant is distinguishable, frosting our ears with grimness. The snare is the most prominent instrument in the entire mix which, depending on your preference, could be a terrible thing here if you don’t like a tinny and tight sounding snare. The drums are loud and natural sounding but very dry emphasizing the skill level of Thinnarat, but not truly fitting into the album’s overall raw style. Even just a hint of some reverb would be a major help in melting the drums into the mix. Anukul’s vocals are screeches and rasps of throat-scraping caliber. I’m sure he can barely talk in real life. Tossapon’s bass is ploddy. He inherits space in the mix due to the lack of low-end from the drums and guitars, earning him free reign to basically do whatever he wants and be heard easily, but he generally plays along, occasionally dumping a well-rehearsed run into vacant space. Overall, this was actually an enjoyable listen. Its not going to be my first choice to put on if I were looking for blistering raw black metal but I’d listen to it before a good portion of other mundane garbage. Religious Malediction is doing some really neat things with the genre that, while not totally unique, are of a quality worth taking note of. The songwriting is mature as evidenced by Religious Malediction’s use of strong transitions, twists and bends in the right places, varying combinations of instrument arrangement, and memorable riffs. I think the only thing holding this back from being recommendable to the body politic are some minor production related issues which are likely to dismay what has become a less heady black metal audience.