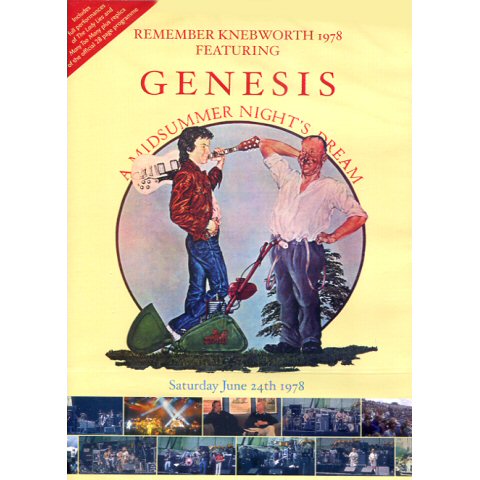 In 1978, British concert promoter Freddy Bannister was hoping to avoid the politics and pitfalls he’d experienced two years earlier with the Rolling Stones at the Knebworth Fair. So, instead of putting on one show with a high maintenance headliner like the Stones or Led Zeppelin (who would eventually play the festival over two weekends in 1979), Bannister promoted what he presumed to be two lower key shows at Knebworth. Both were wildly diverse in billing. Genesis, along with Jefferson Starship, Tom Petty and the Heartbreakers, Devo, Brand X, Atlanta Rhythm Section and Roy Harper, played on June 24 and drew 80,000 people. Frank Zappa (a personal favorite of Bannister’s), the Tubes, Peter Gabriel, the Boomtown Rats and Rockpile played to a smaller, yet equally enthusiastic crowd on September 9. From this an odd and old 23-minute film has surfaced on a DVD called Remembering Knebworth 1978 Featuring Genesis: A Midsummer Night’s Dream. Stiffly narrated and routinely shot, this news-style profile includes individual interviews with Phil Collins, Mike Rutherford and Tony Banks; a sound check video of “Many Too Many”; and some live clips featuring “Lady Lies” from the June 24 festival. For a diehard Genesis fan this is enough. The Lady Lies shows Genesis at a very unique point in their career. Touring behind the album And Then There Were Three, the live footage here shows Genesis caught in a musical twilight zone. They had just lost guitarist Steve Hackett — their last real link to their progressive rock past — and were one album away from becoming eighties MTV pop stars. It really is the last gasp of Genesis as the torch-bearers of prog-rock, and for that reason alone has historical value to the diehard fan. The performance is also really great stuff. Collins in particular is a whirling dervish, dashing from his role as frontman at the mike to the drum kit during the extended instrumental breaks. The sound check of the song Many Too Many is just video material as the audio is taken from the studio version. There’s a couple of added bonuses here: a photo gallery of all the bands that played with Genesis, and an interview with Freddy Bannister from 2007. The retired promoter talks with Jon Kirkman about all the Knebworth festivals he promoted, leading up to A Midsummer Night’s Dream and how well it came off. For an interview that clocks in at around 30 minutes, it would have been nice to hear some of Bannister’s more colorful stories about his dealings with the Stones and Zeppelin (which he talks about extensively in his book), but maybe they’re saving those for future releases.