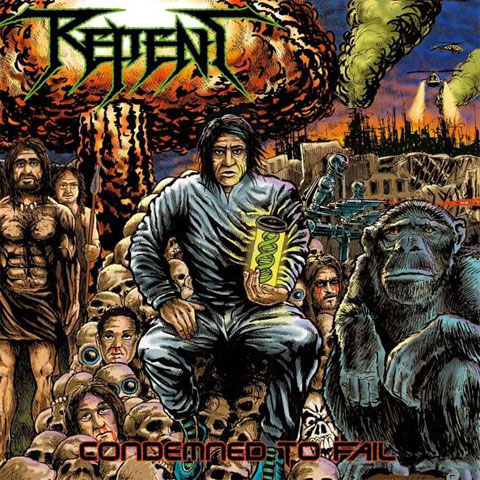 If you had to name one German band among the first of the second wave of thrash in the wake of the 1980s pioneers, it would be Repent. Forming in 1992 when this type of metal was not a trend anymore meant that you had to be totally convinced by what you wanted to do, sticking to it without compromise regardless of ephemeral fads. This has remained the case for the group against all odds and changes in both the business as well as on a personal scale, and their fourth record is another proof for the fact that years of experience in combination with unbroken passion for the cause are priceless – as “Comdemned to Fail” stays true to tradition and, at the same time, ahead of the pack. During the seven years since the preceding “Vortex of Violence”, the band once again underwent line-up changes, although the outcome has been nothing but positive. Drummer Andy and bass player Alex, who already played on Repent’s second demo in 1998, are the most agile rhythm section they ever had while front man Eumel, who took an intermittent break due to private reasons, seems to put more energy than ever into his gritty voice. Repent’s Condemned To Fail release is a conceptual work. “I just can’t write about meaningless things such as violence, boozing or zombies. We consider ourselves to be creation’s crown but have to live in harmony with nature instead of destroying it.” Yet of course, the quintet itself cherishes its own form destruction – especially with ‘Wimpreaper’, which cites countless genre classics without contradicting the members ethos. After all, thrash’s stylists have offered aggression with depth right from the beginning – and in 2019, these South Germans are carrying their torch with exceptional dedication. It’s a professional hobby, but that doesn’t mean we don’t stand a chance against more successful acts, Rath confirms. Songs are what matters, and people keep telling us that we did a great record or live show, which is exactly why we are still going on – as idealists and for the fun of it all, though also to compensate for every day madness. It’s metal therapy, so to say!