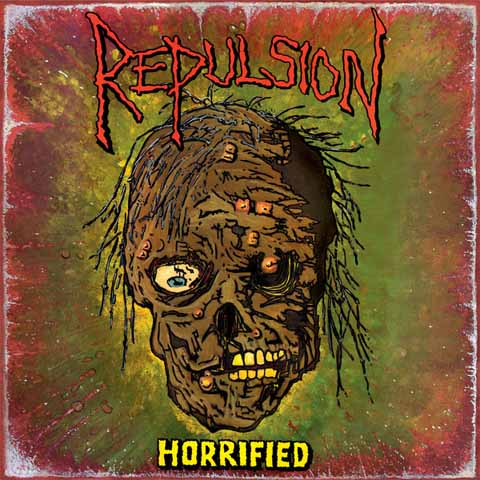 Despite being somewhat primitive by modern standards, Horrified is widely regarded as a classic album among grindcore aficionados and is one of the more influential early albums in that style. The songs, mostly in the one- to two-minute range, are constantly up-tempo, alternating between blastbeats and double-time thrashing, with only a few sections approaching any kind of groove. The bass creates an unholy mess of distorted sludge, while the guitars bash out simple thrash riffs as well as some of the most incredibly noisy whammy-bar-eruption solos imaginable. The vocals are delivered in a rough, mid-range sneer (rather than the exaggerated Cookie Monster style of much later grindcore) that shows virtually no variation from one track to the next, either in sound or in the rhythm of the words. You’d be forgiven for thinking that once you heard four or five songs, you’d heard the whole album, because on the surface there isn’t much of a difference from one song to the next. Then again, variety probably wasn’t high on the band’s list of priorities — this is more about constant intensity and extremity (something that’s always relative to the times, meaning it isn’t so extreme anymore). Certain songs do stand out — for example, “The Stench of Burning Death” (whose opening riff was borrowed by Napalm Death for their song “Deceiver”), “Radiation Sickness,” and the brilliantly titled “Maggots in Your Coffin” (also covered by Napalm Death on their later Leaders Not Followers EP). This is an album whose legacy is inevitably shrouded by its historical impact (especially on the early Earache label school of grindcore) as well as by a certain level of nostalgia among those who happened to be of the right age when this was first recorded back in 1986. Listening to it nearly 20 years later takes some reorienting on the part of listeners who have been exposed to the likes of Dillinger Escape Plan, Brutal Truth, Cryptopsy, and others who have taken the early grind template to wildly creative extremes in years since (not to mention being accustomed to the more modern production techniques that have evolved over the years). But, taken on its own terms as a direct blast of youthful, horror-inspired thrash/grind mayhem, it still has value beyond its historical/evolutionary importance.