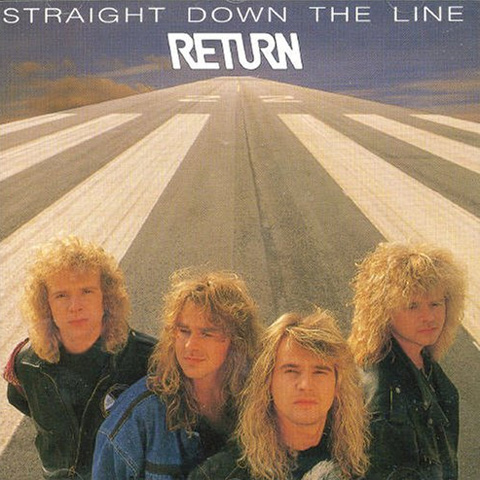 Return -Straight Down The Line cd

Return is a Norwegian rock band that peaked in popularity during the late 80s with a hair metal style that went out of fashion in the early 90s. With several Top Ten smash hits to its name, most of them power ballads, the band reunited after the turn of the century and proved popular as a concert draw. Founded in 1980 in Stange, Norway, the band is comprised of Knut Erik Ostgard (vocals, guitar), Steinar Hagen (guitar, vocals), Tore Larsen (bass, vocals), and Oyvind Hakonsen (drums). Return scored their initial breakout hit in 1985 with Sheila, and a couple years later they made their full-length album debut with To the Top (1987), a Top 20 hit on the Norwegian albums chart that includes the early hit Sing Me a Song in addition to Sheila. The band’s second full-length effort, Attitudes (1988), was an even greater success, reaching the Top Five of the albums chart and spawning the Top Ten smash hit Change the Attitude. The follow-up efforts Straight Down The Line (1989) was similarly successful, reaching the Top Ten of the albums chart. This third album a brilliant Scandinavian AOR/Melodic hardrock album with those catchy power rock anthems and ballads you have come to expect from this band.