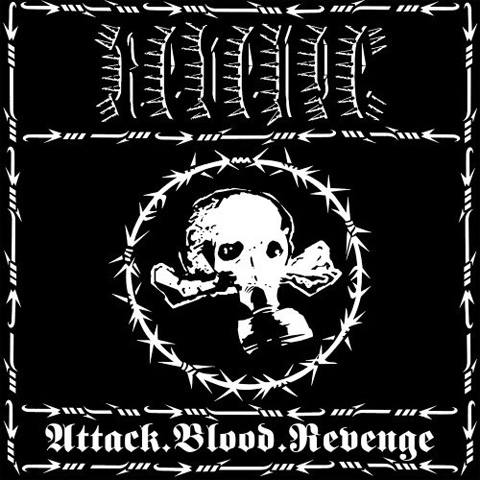 With Revenge the Canadian post-Conqueror entity pretty much just continuing where Conqueror left off. But if you think that the Revenge’s debut album Triumph.Genocide.Antichrist was harsch then you should avoid this mini album, Attack.Blood.Revenge that was released two years earlier. If you have seen pictures of the band with J. Read (Axis Of Advance) and Pete Helkamp (Angelcorpse) with their bullet belts and other such militaristic insignia you could guess its a war metal act and maybe they are, its actually hard to tell. Sure you can call it raw, devastating, chaotic or even inhuman. You could probably even debate of whether this can actually be classified as music. J.Read doesnt let up for a second, there are hyperblastbeats, screaming and barking vocals as well as some screeching yells as well as distorted guitars, and all this at the same time makes it almost painful to listen to or call it brutality if you like? Whatever name, there’s lots of that. Now music is an art and art differentiates from person to person and I know theres plenty of people out there that like their music extreme and adore their Beherit and Blasphemy demo recordings and you probably already have heard this band. If not then this is a sure buy for all of you. So black metal fans who can tolerate lots of blast beats, or death metal fans who can tolerate screamed vocals could also check this out.