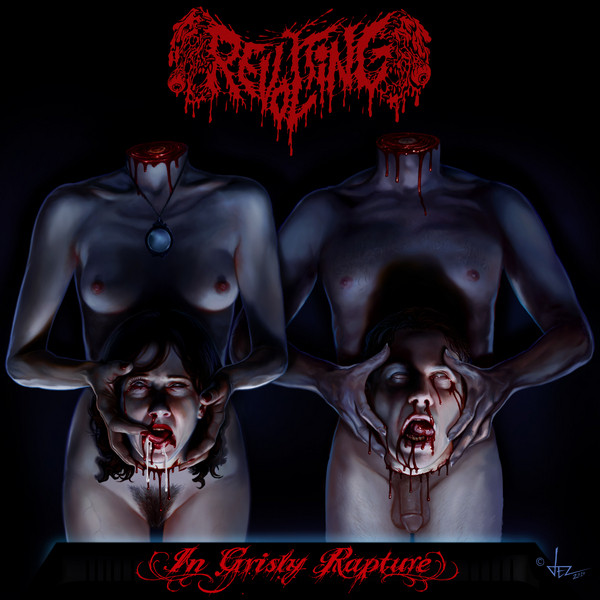 I’m not sure what’s up with Rogga Johansson. Either he’s born with an insane amount of talent and ideas, or he spends his entire days writing riffs and sorting out the really killer ones. If you’ve ever heard Paganizer, Putrevore, Ribspreader, Bone Gnawer, The Grotesquery or Bloodgut you’re familiar with his work. One thing that sets Revoltings third album apart from its two predecessors is the fact that it sounds somewhat more serious, with less frivolity. Not that they weren’t good albums, but In grisly rapture just sounds more dense, intense and with a greater sense for melody. What we’re dealing with, like all the other previously mentioned bands, is old school death metal, and in particular that of the Swedish style. The riffing’s solid, and the guitar lines deliver catchy, yet often quite fierce, melodies, which on top of the typical drumming of their agenda and accompanied by Rogga’s wicked voice, are cause for a majorly effective album. I have no doubt in my mind the guys have fun whipping this up, and with the extremely horror flick inspired lyrics courtesy of Dezpicable Desmond (never heard of the guy, but he’s also the one responsible for the utterly awesome cover art) it still sounds like a Revolting album; just more serious. The chunky and heavy production really gives note to the bass drums, and in my awesome speakers (and at the right volume, of course) really echoes through my gut. The bass might not take to the forefront, but it’s most definitely there, albeit with the guitar predominately mixed. Sound-quality wise this is just wicked. And with the gore-spewing, blood-drenched, limb-cutting (all metaphorically, of course) death metal there really is no reason for you not to check this out, ‘cause I have to say I was hooked half-way through the initial spin. Just imagine a mix between Ribspreader and Bone Gnawer, or in case you’re not familiar with either act a mix between Unleashed, Grave and Blood Freak. Killer in every which way.

Track list:
1. Hell In Dunwich
2. The Plague Of Matul
3. Human Exterminator
4. Dr. Freudstein
5. Died Of Fright
6. Sucked Into The Sand
7. (Beyond) The Book Of Eibon
8. The Devil Witch
9. Hideous And Revolting