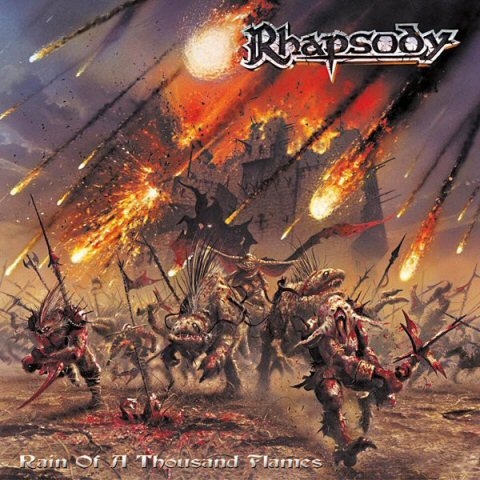 If ‘Dawn Of Victory’ marked a move away from the symphonic approach of its two predecessors towards a more riff friendly angle, this EP is definitely the next step in the process. Although the orchestral and formal attributes of the band have not wavered much, the darkness and heaviness of the band has jumped a considerable bit into the realm of Helloween’s ‘The Dark Ride’ at times. The vocal approach has also gotten quite a bit rougher, although indications of this direction were evident on the title track of the previous album. One curious thing about this EP is just how long the thing is. 10 years ago this would be considered a full length album and it would have been considered a bit too long for the radio friendly variety, especially considering that two tracks on here break the 10 minute mark. With the exception of the album that follows it, this release is probably the most heavily conceptual work, relying on references to previous events, a lot of narrated passages courtesy of Sir Lansford (who does go a tiny bit overboard in his delivery), and the reprise of the principle theme of the title track to close the listening experience. The emphasis on this is pretty heavily on the metal aspects, highlighting a lot of Judas Priest and Helloween inspired guitar riffs, solo interchanges that rival Stratovarius and Rising Force, but still a consistently melodic approach. The principle highlight is the title track, which is one of the best symphonic/speed metal songs this band has ever put out, particularly noteworthy is the extremely dead on chorus. Luca’s film score and classical influences are on full display on the longer tracks, featuring an interesting set of musical paraphrases and inspired movements from Dvorak’s New World Symphony and an Italian Horror movie. Although treated as an aside story by Rhapsody, the plot development and the music on here is quite excellent for an EP. This is definitely essential listening for any fan of the band or the genre that they have helped to pioneer. If you like your metal fast, furious, epic, melodic, and full of pomp and grandeur then this is something that belongs in your collection.