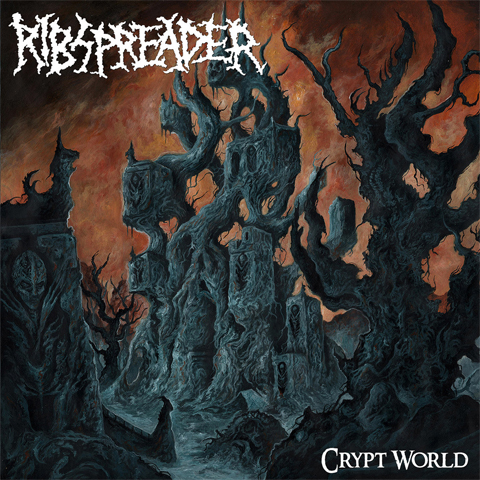 To keep this short, Ribspreader’s 2022 opus Crypt World is outstanding. Ribspreader has been delivering the goods since their 2004 album Bolted To The Cross and even if most metal fans, no matter what genre, tries to be true by claiming that the bands earliest material is always the best. Or how amazing the rehearsal tape before the first demo really was, before the band sold themselves to the greedy record industry and signed a record deal. Well f*ck all that crap. Its rarely the truth and in Ribspreaders case its definitely not true. The band has gone from strength to strength and Crypt World is not only the best album Ribspreader has created it could very well be among the top 5 albums Rogga has ever created, and now where talking about a man that has been turning out heavy death metal riffs for nearly 200 discs, so the words says a lot. Rogga is joined by Venom Inc and ex-Massacre drummer Jeramie Kling and Deicide and ex-Massacre guitarist Taylor Nordberg, who both of them also plays with Massacre bassist Terry Butler in Inhuman Condition. Rogga was also involved in the 2021 Massacre album Resurgence and its now obvious that it has left its mark. The three together have created a bone crushing death metal album that has a Massacre sound. Anyone that adores Massacre needs to check this out. Listen to Good Hatchet Fun, The Bone Church or The Dead And The Rotten and then you will agree that this is a real gem