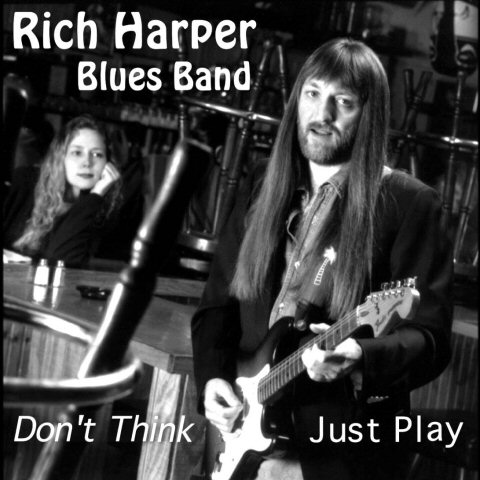 Reduced price due to cover and cd being ex

Signed by Rich Harper during the Scandinavian tour

Rich Harper learned to play blues guitar the traditional way by primarily being self-taught listening to and learning from the recordings of artists like Eric Clapton, B. B. King, Rory Gallagher, Freddy King, Duane Allman, and so on. Rich developed his own slide style using the same Coricidin medicine bottle as Duane Allman. After paying his “blues dues” in small blue collar towns throughout Pennsylvania, Rich moved to Los Angeles to gather like minded musicians and formed the Rich Harper Blues Band. With the success of their debut album, “Don’t Think Just Play”, the Rich Harper Blues Band was not only selected as one of Amazon.com’s prestigious “Emerging New Blues Artists”, but Taxim Records, a German label, joined the group’s growing list of blues fans by placing another cut, “She’s On Her Way Up”, on their compilation album titled “More Desaster City Blues”. It wasn’t long before the band’s name was popping up in blues magazines everywhere and blues societies were urging their members to check out the exciting new group who were carving out a unique niche for themselves in the blues world. By the time the band released their second album, “Bottled Up Blues”, Europe had jumped on board by making the band the #1 selling artists in Switzerland on Amazon’s charts. Radio stations worldwide welcomed the new album with open arms and this time one of the cuts, “As She Moved In (My Guitar Moved Out)”, topped Rolling Stone Magazine’s “MP3 & More Blues Chart” at #1. The international blues scene stood up, did a double take, and these talented artists haven’t stopped since. This debut from the Rich Harper Blues Band starts off with a punch, kicking into a high-energy groove that barely lets up until the last track. Harper’s lead guitar work is solid throughout; his playing on “I Love the Woman” and “She’s on Her Way Up” is particularly confident and evocative. While the band’s cover of “The Thrill Is Gone” doesn’t offer anything new in the way of interpretation, it’s well played, and by the time the album reaches “Hands Off” you get the sense that you’ve just spent the night in a particularly good, out-of-the-way blues club and that this is the last song. “Guitar Rag” seems to be almost an afterthought, what one might hear after the sound system’s been turned off, the lights have come up, and the chairs are all back on the tables.