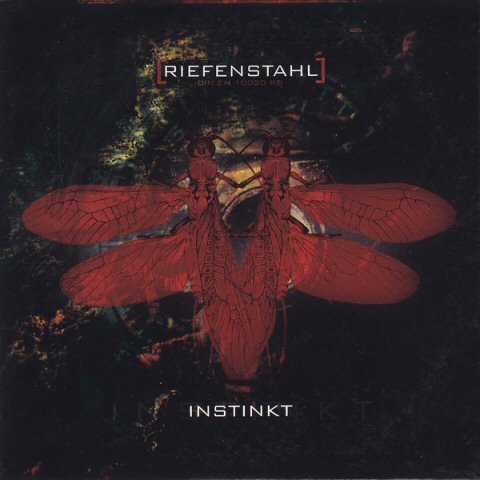 Riefenstahl? Wasn’t that a female director which made a couple of, movie wise brilliant, hails to the Germanic “Rasse” during a black-brown period in the European history? Well, yes, but it’s also the name of a German band. And that band now brings us their second album; ‘Instinkt’. Musically this album can be categorized as a the new German way. The sound shows a lot of Oomph covered with a Böhse Onkelz sauce. This whole dish is served with a salad of Subway To Sally, a Megaherz dressing and a dash of Such A Surge (‘Augen Auf’) to spice it up. And by saying this, it’s clear that this album hits bulls eye in my book. The German lyrics are of an international standard and the compositions are generally speaking very accessible. This is what you might call music for the masses. If Oomph can land a number one hit in the fatherland, these gents can do it too. Just listen to tracks like ‘(Ich) Hält Dich Fest’, ‘Kalter Traum’ and extremely catchy ‘Es Ist Vorbei’. One thing they all have in common, they stay ringing in your head for days…no…weeks on end. One question could be posed: is this band good enough to stand out of the crowd? Some would argue that they lean too much towards the recipe which Oomph utilizes. But due to the fact that the vocals of Riefenstahl are better than Oomph’s, it shoudl reach a wider audience. In short, if German lyrics don’t put you off, you’re totally into the bands named in this review or just feel like a dose of genuine dark guitar rock, this is the absolute tip for the upcoming season.