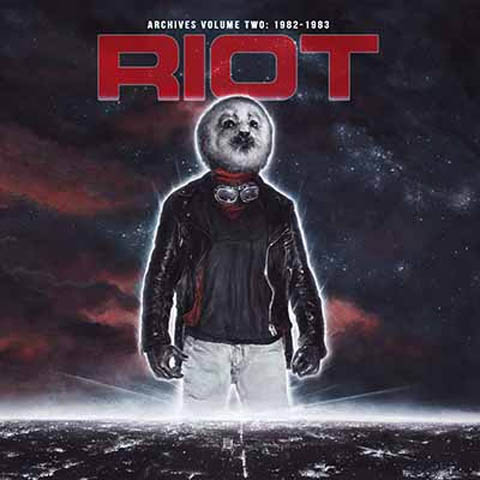 Here is some amazing material from the archives of the Mark Reale estate, c/o Anthony Reale, The Archives Volume Two album features Rhett Forrester audition tapes and different mixes as well as a ldvd. Rick Ventura was the second guitar partner in Riot for legendary axeman Mark Reale and when Rhett Forrester finally joined Riot for the Restless Breed album, the musical direction of the band changed quite drastically. Was this stylistic change only down to Rhett joining and contributing to the songwriting or was it rather some sort of “natural progression” for Riot in general? “Well, he was a different singer,” finds Rick Ventura. “There was no choice, Guy left, we adapted. Rhett had a bluesy side and a lot of swagger.” Of course, Rhett Forrester joining Riot also changed the dynamics within the band. According to Rick Ventura, this had some effect on the actual songwriting process as well: “It did change a bit, not as much collaborating. I always wrote my songs and presented them to the band. I really like the »Restless Breed« record. It’s a bit bluesier, stuff like ‘Loved By You’ and ‘Restless Breed’ itself. We had a different singer and wrote what worked with Rhett.” On »Riot Archives Vol.2« there is a song called “Hot Life”, which did not make it onto any Riot album, Rick Ventura believes it has been written by Mark Reale. In addition to that, the record also contains the original auditions for Rhett Forrester, with him singing “Hard Lovin Man” and “Vigilante Killer” – a real jewel – plus an extraordinary 8-minute version of “Loved By You”. Rick Ventura comments: “I know. It’s so cool! Just one of those things.” “You Better Run” is another obscure song from the Riot archives, it has a bit of an AC/DC feel about it, the chorus though is quite AORish in nature, with nice guitar work all around. »Restless Breed« from 1982 was followed by »Born In America« in 1983. “I liked »Restless Breed« a bit more,” compares Rick Ventura the two records. “I felt some of »Born In America« was a bit contrived, though I do like ‘Where Soldiers Rule’ and ‘Vigilante Killer’”. Comparing the different eras with Guy Speranza and Rhett Forrester on vocals, Rick, whose last album with the band was indeed »Born In America«, concludes: “Well, certainly the Guy era was decisive, that’s what got the fan base. I enjoyed both. Rhett was fun to work with. In the end I left Riot because of frustration, overall direction and management issues. No major label wanted us. It just wasn’t the same Riot anymore.”