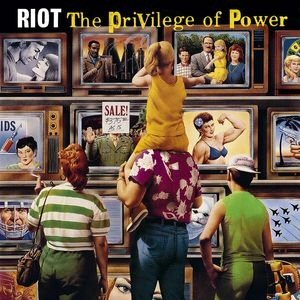 Riot -The Privilege Of Power dlp

Like Queensryche’s 1988 prog metal masterpiece Operation: Mindcrime, Riot’s Privilege of Power works off of fear, paranoia, and conspiracy, employing ten complex tracks that work as a single unit. Where Mindcrime stuck to a straight narrative, working every Pink Floyd-ism it could into its disillusioned protagonist, Power takes a broader, less specific approach to its subject. The atmospheric snippets that tuck-point each song into place help maintain a general air of unease, eventually giving way to an ambiguous but entertaining revolution that lacks Queensryche’s self-importance. Lyrically, the group does little to deviate from obvious metaphor and Viking simplicity — in metalspeak something as mundane as an airplane ride (Metal Soldiers) is described by shouting We climb aboard the eagle made of steel followed by a four-octave scream — but true blue fans of heavy metal know the genre’s scholarly limitations, and revel in its face-value descriptions of rebellion and honor. The bizarre use of a horn section (keyboards?) on tracks like On Your Knees and Killer should have been left out but a track like Black Leather And Glittering Steel should help you get your daily adrenaline rush. Guest vocals on Killer by Joe Lynn Turner.