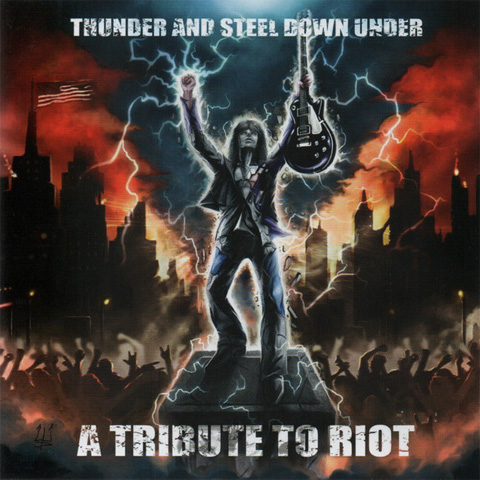 Thunder And Steel Down Under A Tribute To Riot cd

Thunder And Steel Down Under, is the first ever Riot tribute album and it includes Riot classics performed by bands and artists such as: Axel Rudi Pell, Crystal Viper, Attacker, Alpha Tiger, October 31, Savage Master, Night Demon, Dexter Ward and others. The album is limited to only 1000 copies worldwide. Income from the album will be given to Sir Tony Reale – father of the late Riot guitarist and founding member, Mark Reale. As it was mentioned on VH1’s That Metal Show, Riot are one of the innovators of Metal music in America and beyond. Their albums such as Fire Down Under, Rock City, Narita, Restless Breed or Born In America are the classics of Heavy Metal, and their 88 album Thundersteel helped to shape a genre which we know as Power Metal. Band’s history has been marked by bunch of tragic events: Rhett Forrester who fronted Riot between 1981 and 1986 was killed in 1994, the original vocalist Guy Speranza (in Riot between 1975 and 1981) lost his battle with cancer in 2003, and band’s founding member and leader Mark Reale (who was also the only one constant Riot member since the beginning of the band) left us in 2012, after suffering Crohn’s disease. Thunder And Steel Down Under is not a usual compilation with bunch of cover songs. It’s a celebration of the Riot and Mark Reale legacy, and a homage paid by both American and European bands and musicians, who were influenced by this premier act.