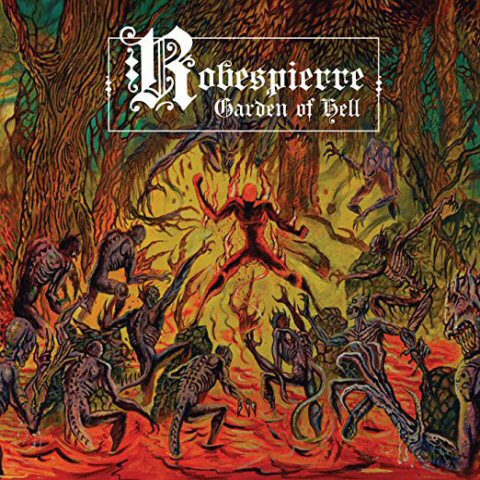 Cult New Wave of British Heavy Metal act Robespierre, from Liverpool, toiled in the musical underground during the heyday of that cherished metal movement, but never recorded an album proper…until now that is. Garden Of Hell is the bands debut album, now arriving 35 years after they originally appeared on the scene. Was it worth the wait? Well, for NWOBHM completists, Garden Of Hell will be a fun listen, a rough and raw release that seems to have tumbled out of a cassette deck time portal from 1984. Opening with the wonderfully Motorhead paced ‘Punish Oppressors’, you can not help but be drawn into the bands world. ‘Mare Of Steel’ again hits the spot, and that Doom tinged riff on ‘Dwelling In The Shadows’, immense indeed. Yes it’s all retro but it’s done by guys who were doing retro when it was current (if you see what I mean) and therefore, to be blunt, they know what they’re doing. The album is 100% NWOBHM but with a splattering of late 70’s Punk, a limb and a torso of classic Doom, and a great ability to not take itself too seriously. If I had to pick a favourite track it would be between the last two songs on the album, namely ‘Welcome To The Cult’ and ‘I Am A Flower (In The Garden Of Hell), both exude all that you would want in a classic British Metal album Some things really are worth waiting for, a joyous romp down memory lane and an album that I’m sure will continue to grow on me, all together now…”Shattered dreams in a wishing well, I am a flower in the garden of Hell”