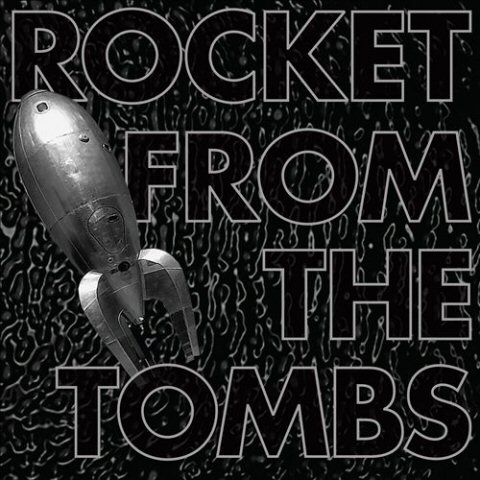 In early 2012, David Thomas posted a short essay on the Rocket from the Tombs website titled “A Band Is an Idea,” in which he declared, “The idea of a band can endure all changes if it’s a really good idea.” Thomas’ thoughts seemed to indirectly address the departure of guitarists Cheetah Chrome and Richard Lloyd from the reunited RFTT line-up; their duelling guitar firepower was one of the best things about RFTT’s initial reunion shows in 2004 (and the live-in-the-studio document of their concert set, Rocket Redux). RFTT’s 2011 album Barfly (their first proper album of new material) featured Chrome and Lloyd, but it was a curiously subdued set that seemed to keep the guitarists on a short leash, and it was hard not to wonder if Thomas really wanted to collaborate with the guitarists after years as the benevolent dictator of Pere Ubu. One can only imagine the scenario that brought new guitarists Buddy Akita and Gary Siperko into Rocket from the Tombs, but Black Record, the first RFTT album since they joined the group, is everything Barfly was not — it’s lean, fierce, powerful, and consistently rocks hard, with Akita and Siperko firing sharp riffs back and forth as bassist Craig Bell and drummer Steve Mehlman push the music forward with plenty of sweat and muscle. In nearly all respects, Black Record is the toughest and most straightforward rock & roll album Thomas has made since Pere Ubu’s The Modern Dance, and while it’s padded a bit with a pair of covers (a reworking of “Sonic Reducer,” which RFTT already reclaimed on Rocket Redux, and a nervy charge through the Sonics’ “Strychnine”), in a brief 30 minutes this kicks nearly as hard as Rocket Redux, and if Akita and Siperko lack Chrome and Lloyd’s vision, they nearly best them in sheer force. Thomas (who uses his old stage name Crocus Behemoth in the credits) bellows with furious, bilious joy throughout these sessions, and if he’s increasingly eager to provoke his listeners (the album opens with the lines “Black culture is bankrupt/White folks lost their spine/Muslims want to kill us all/And you’re no friend of mine”), you don’t have to like his rants to admit they connect in context. If Thomas set out to prove that Rocket from the Tombs is his idea and he can reassemble the components at will and still make it work, Black Record does just that, and suggests this project has a livelier future than most anyone would have imagined.

Track list:
1. Waiting For The Snow
2. Welcome To The New Dark Ages
3. Strychnine
4. Sonic Reducer
5. I Keep A File On You
6. Nugefinger
7. Spooky
8. Coopy (Schrödingers Refrigerator)
9. Hawk Full Of Soul
10. Read It And Weep
11. Parking Lot At The Rainbows End