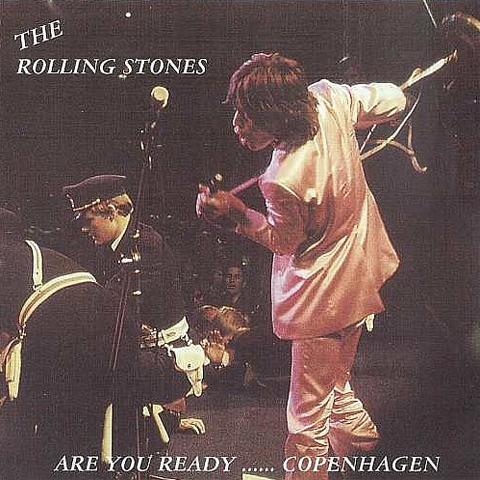 By the end of the European tour in 1973 the Rolling Stones played two shows at the Brøndby Hallen in Copenhagen (on October the 7th). Debate exists about the proper sequence of the two shows. There is no internal evidence indicating which is the early show and which is the late, but they can be distinguished by the different song played in the sixth slot of the set list. It has been commonly assumed that Doo Doo Doo Doo Doo (Heartbreaker) was played in the early show and Dancing With Mr. D the late. In May 2008 a new tape source appeared labeled the early show and has Dancing With Mr. D on it. So now Stones collectors are now convinced that the reverse is true, so that Dancing With Mr. D is the early show and Doo Doo Doo Doo Doo (Heartbreaker) is the late. Are You Ready Copenhagen features the more popular late show and the sound quality is good to very good but distant and distorted. The distortion increases a bit from Honky Tonk Women to the end of the tape. Like the two previous tours, the show begins with an energetic Brown Sugar followed almost immediately by Gimme Shelter. Keith Richards spot is very early in the set as Jagger says mysteriously, We’re gonna get Keith up to sing, from the film of the same name, Happy. After Tumbling Dice they play a new song set with three numbers from Goats Head Soup. Doo Doo Doo Doo Doo (Heartbreaker) is one of the better songs from the album and an effective live piece. Although it began the tour as a regular part of the promotion of the new album, this song made fewer appearances than the others and would be played only one more time on this tour after the late show in Copenhagen. I just need my mic stand and we’ll do another one off the new album. Thank you kind sir. I’ll tell you what we’ll do. We’ll do a new song for you and this one’s called Doo Doo Doo Doo Doo. Now we gotta get the tempo right. Mick then hums the opening melody as Keith on guitar and Billy Preston join in on clavinet. The funky interlude in Copenhagen isn’t as good as earlier in the tour, sounding quite repetitive. Taylor is an amazing blues guitarist but seems to draw the line at funk. You Can’t Always Get What You Want features a sax solo by Trevor Lawrence that is a precursor to those played by Ernie Watts on the 1981 tour lending jazz cabaret feel to the piece. Midnight Rambler is the show stopper as Jagger enacts the drama and attempts very hard to encourage the audience to participate in the song, following his whoops and shouts. They whip the audience into a frenzy with the closing numbers Jumping Jack Flash and Street Fighting Man.