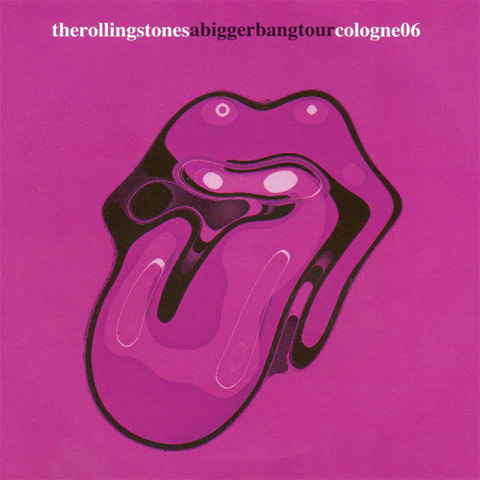 Arriving in late afternoon at the Rhein-Energie Stadion in Cologne, Germany on the 23rd of July 2006, and being surprised that there were no ques and not so many people hanging around waiting to get into the stadium. Sure it was a really hot day outside and there had been really hot temperatures in western Europe for the past two weeks. Later we would find out that when the sun finally started to give us a little relief later on in the evening than the Stones had managed to keep the hot temperature with flames, fireworks, hot tunes and a wonderful attitude. People had been complaining that the ticket prices were way to high but just prior to the show it was only a few empty rows in the stadium, so my guess is that people simply had been hiding in the shades. Exactly at 8:55 PM the familiar intro began and then 2 minutes later the Stones were out on the stage and the clear, hard-rocking sound of Jumping Jack Flash was everywhere. The crowd in the standing area went wild and gyrated to the music. Keith’s hard riffing guitar was extremely loud from where we stood. Mick was also in great form, already going from side to side as he welcomed us to the show. It was over before we knew it, and then It’s Only Rock and Roll began almost immediately. A really hard-rocking version with Keith’s Chuck Berry-esque solo slicing into my eardrums from where we were. A Bigger Bang made its first appearance when Oh No Not You Again was played as the third song. The nice solo by Keith on this song really tears the house down. We could here Mick singing his heart out on classics such as: Shes So Cold and As Tears Go By. Lisa Fisher was also one of the highlights, with Night Time she really tore the house down in her long red dress. She stormed through her verses and it was amazing to hear how good her singing was on a number like this. She received a great cheer at the end from the German crowd. The four-song set on the B-Stage was highlighted by the inclusion of Get Off Of My Cloud. After the return to the main stage, Sympathy For The Devil was followed by Start Me Up. The Stones ended with Satisfaction as usual but the Stones are still doing this song really well and after the hundreds of times that they must have played it, its so nice to see that they can still put such energy and emotion into Satisfaction for us to enjoy. This double cd also features 4 bonus tracks of songs not performed in Cologne this evening. The four tracks were instead recorded at the Gillette Stadium in Foxborough, Boston, Usa on the 20th of September 2006.