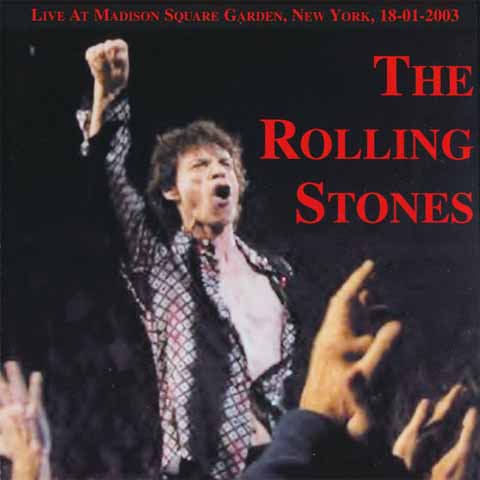 The Rolling Stones tour Forty Licks kicked off in September of 2002 and ended in November of 2003. the tour grossed over $300 million, becoming the second highest grossing tour at the time, behind their own Voodoo Lounge tour of 1994-1995. The Stones performed three shows at Madison Square Garden in New York on this tour. The first one took place on September the 26th with The Pretenders as opening act then they returned in January of 2003 for two more shows with Ryan Adams as support. The two shows took place on the 16th and 18th of January and this album captures the band on that last show and the setlist was very similar to the show they did 2 days earlier. Like the previous New York show Street Fighting Man is the strange choice for a set opener followed by the more standard Start Me Up. What is surprised in just how potent If You Can’t Rock Me sounds in this show. It was resurrected after being ignored for almost thirty years and it burns the stage with incredible intensity. Afterwards Jagger plays to the audience, saying: It’s great to see you here looking really beautiful, all dressed up. You think you’re on TV or something? I mean, I know we’re on TV tonight, we’re on HBO tonight right? So we gotta look our best. This isn’t the usual thing you see on HBO really. Oh, maybe it is the kind of thing you see on HBO. I mean, the Rolling Stones is like a family. But it’s not quite The Sopranos. And we’re not Six Feet Under. But tonight is Sex In The City right?” before playing Don’t Stop. After Monkey Man and Angie, they perform another short Let It Bleed set. They played the title track and Midnight Rambler but not Love In Vain or Live With Me. After the introductions Richards sings his two song set. Instead of Slipping Away and Before They Make Me Run, which he played the previous show, he chooses Thru And Thru (an appropriate choice for television, given all the expletives) and Happy. After You Got Me Rocking Jagger said I read in the papers today… this will probably be the last Stones show at Madison Square Garden….. I don’t think so. A raucous Can’t You Hear Me Knocking” follows in the set. Sheryl Crow came up on stage to do Honky Tonk Women with them, arriving during the I laid a divorcee in New York City… part of the song and Mick was all over her. Unusually, the show ends with the B-stage set. This evening they play When The Whip Comes Down, which was played on the B-stage the previous New York show and is the only song from Some Girls finding itself in the setlist. Since that album is as much about New York City as it is the Stones, it would have been natural for them include Miss You, Neighbours and especially Shattered. Brown Sugar is the set closer for this show and the first encore is a six minute version of Sympathy For The Devil, followed by Jumping Jack Flash.