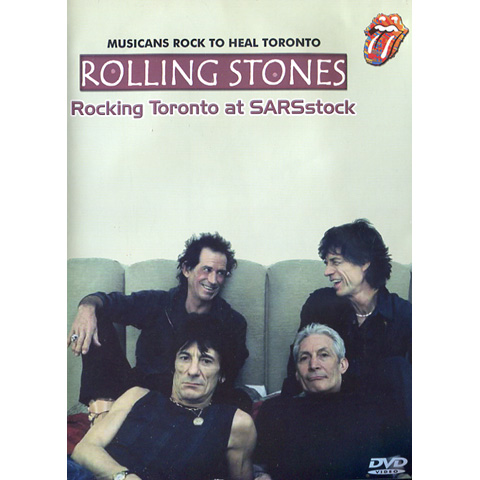 Rolling Stones recorded live at the SARSstock festival on the 30th of July 2003. The band flew into Toronto directly from Prague shortly after 7pm Monday night Toronto time. They flew back to Europe directly after the show. Around 450,000 people arrived which made this event one of the biggest paying rock shows ever. We are all here for a weird reason, Keith said. Toronto is now booming, Mick said. Mick was so busy thanking the nurses and health personnel, and also the armed forces of Canada and US all over the world, who watched the show live, that he forgot his main job. But Keith rushed over to tell him that there was a band to introduce, and after that Keith was on. It was strange to be in a crowd of half a million people. The number of people who walk side by side you through the gates at 2pm, eight hours before the Stones are on, and the dust and feel about it, makes you think about the scenes from Woodstock and Altamont. People came in masses, all the time, all day, through three gates. There were speakers and monitors spread out all over the place, so even if only the first 150,000 or so could see clearly what happened on stage, the others could enjoy the sound and the visuals anyway. But I would not say it is the perfect way to see a rock show. This was more of an event. In fact, the guy next to me on the underground back home said: “They should do this every year!”. Ruby Tuesday was beautiful, and a nice surprise. Justin Timberlake made a nice dancing partner for Mick on “Miss You”, but he seemed to be in a different league. There were thrown empty bottles on stage when Mick and Justin were up front dueling, and as they danced on further back to the stage, Keith did some stage police work. He walked up front, you could see the anger in his eyes, he did some pointing and waving with his hands, and he made this “you are braindead” pointing to his head, and there were no more bottles coming on stage. It was the largest stage I have seen ever, with Toronto in large letters on the top, and with the Stones tongue covering the middle “O”. Two large monitors on either side, and a large backdrop of the red maple leaf flag behind the entire stage, which made most of the visuals read colored through the show. Rock Me Baby with Angus and Malcolm was very popular, and Keith touched everybody with his statement “I Love You Toronto”, before he dedicated “The Nearness Of You” to all the nurses. And even if some people started to leave during Satisfaction and JJF, I was surprised that most of the crowd stayed to watch the entire show, including the most fantastic fireworks being done in a long time at a Stones show.