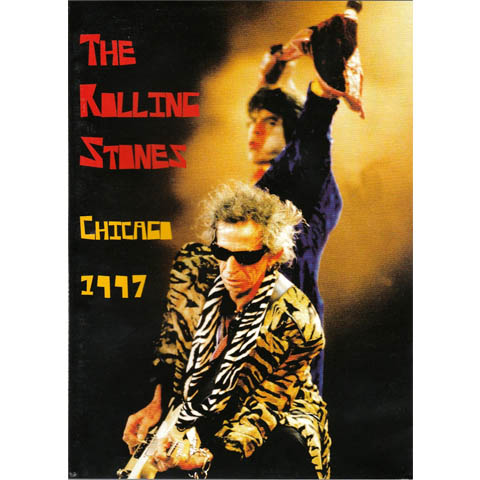 Exactly two weeks after they did their first 1997 club concert in Toronto, and just hours after they arrived to Chicago, the Rolling Stones did their second pre-tour club concert on Thursday Sept. 18 at the Double Door, a small club in Chicago who normally house alternative music rock bands. The decision to do the Double Door club gig wasn’t done until midnight the day before, on Wednesday. Hard core fans with contacts jumped their cars to rush into Chicago. At 9 AM in the morning they put up a sign outside the Double Door simply telling The Rolling Stones. They charged a standard fee of $7 per ticket, you had to show an ID card, and they wrote your name on the armwrist band that was put on each ticketholders hand to prevent ticket scalping (i.e. no blackmarket sales). A total of 230 tickets were sold to people calling in early on the Double Door. Another 170 tickets went to VIP people, and some lucky guys managed to talk their way into the Double Door last minute. The crowd of 400 was actually 100 less than the club can hold, but the Stones management wanted space for TV and radio equipment as well. The bend went on stage shortly before 10 and launched unannounced into Little Queenie, Keith in pink jacket and shades, Mick looking pleased but cool. Rocking on with 19th Nervous Breakdown, You Got Me Rocking, Crazy Mama, The Last Time, they were obviously pleased with the sound and response from the audience – lots of smiles and the occasional hug between the Glimmers. The new single Anybody Seen My Baby made its live debut and the harmonies were a little uncertain but this got better by the second show in Chicago. The highlight was definitely Out of Control with Mick a tightly coiled spring twitching to bounce off the tiny stage; it sounded superb live. Due to the crazy mood and lights from the camera setup, the club temperature got to the boiling point. It was too hot so some had to leave and were meat outside of another thousand fans, not having tickets to get in. The club door was open, and people outside could actually see parts of the stage, and hear the music very good. It was a warm night in Chicago, indeed. This small club gig was a warm up show before the band officially embarked on their first American tour in three years, starting with two shows at Soldier Field on the 23rd of September.