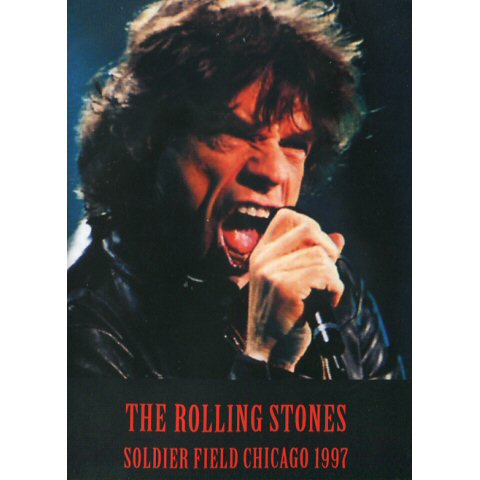 On the 23rd of September 1997 Rolling Stones launched their first American tour in three years. The band were supported by Blues Traveller for this gig. To understand the spectacle put on by the Rolling Stones at Chicagos Soldier Field on an unseasonably cold September night, it helps to know what they did on the same stage on a blistering hot July afternoon in 1978. That year, the Stones had just put out one of their most powerful albums — “Some Girls” — and they performed eight straight songs from the record midway through their concert. Some in the sun-baked audience grumbled — “We’re here to hear the hits, maaaan!” But the Stones went ahead and strutted their new stuff, confident that they still had it — and they did. Almost two decades later, at the Tuesday night opening date of their 1997-98 world tour, the Stones offered only the smallest hints that they remain a band willing to take risks. Though they worked with the Dust Brothers and other new producers to broaden their sound on “Bridges To Babylon,” which was due in stores just a few days after the show, they performed only two songs from the album. In fact, over the course of a two-and-a-half hour set, they played only a half-dozen songs from albums released after 1980. Such a performance would have consigned a lesser group to the state fair oldies circuit. But it may well make the Stones the World’s Greatest Nostalgia Band. Performing on a gilded stage that followed the new album’s “Babylon” theme, and flanked by voluptuous blow-up nymphs that looked like they might have floated in from a Macy’s Day parade choreographed by Caligula, the band — Mick Jagger, Keith Richards, Charlie Watts, Ron Wood — and its backing cast began their trip down memory lane with “Satisfaction” and “It’s Only Rock ‘N Roll (But I Like It).” Though the staging was opulent, it was far more modest than that seen on U2’s “PopMart” tour — and the visuals weren’t so outsized that they dwarfed the Stones themselves. Jagger gave Cher a run for her wardrobe with an array of costume changes. Once a leonine prowler straight out of A Clockwork Orange, the singer now puts on an aerobics class that was the envy of every 54-year-old in the audience. It was up to gray, grizzled Richards to maintain the band’s gangsta image, and he did his best in a leopard coat and wraparound shades. The show lagged at the outset thanks to gaps between songs and the presence of several newer numbers that didn’t get a strong crowd response, but it picked up momentum when Watts kicked the band in the shins with his drum volleys on “19th Nervous Breakdown.” Jagger and Richards, their arms around each other’s shoulders, leaned into the song’s harmonies, as Wood — omnipresent cigarette smouldering between his lips — bashed out the familiar chords. The show reached its musical peak about halfway through, when the Stones borrowed a trick from U2 and strode onto a mini-stage planted in the middle of the audience. Banging out Chuck Berry’s “Little Queenie,” their 1965 hit “The Last Time” and a salacious “Let it Bleed,” they shrunk the spectacle to a concert and proved (with bassist Darryl Jones and keyboardist Chuck Leavell) that they didn’t need blow-up dolls and smoke bombs to generate excitement. Returning to the main stage, the band closed with a long series of deep, reverent bows to its legendary past. Only “You Got Me Rocking,” from 1994’s “Voodoo Lounge,” interrupted the classic-rock memories evoked by “Sympathy for the Devil,” “Tumbling Dice,” “Honky Tonk Women,” “Start Me Up,” “Jumpin’ Jack Flash,” “You Can’t Always Get What You Want” and “Brown Sugar.” These once nasty tales of sex, death and Satan no longer conveyed the danger they once did, but the sound of the Richards-Wood guitar attack tangling with Watts’ drums got almost everybody out of their seats, grinding hips and waving fists. Even performing mostly older material, the Stones proved to be one stadium dinosaur that doesn’t lumber, but rather swings like a hard-edged blues combo. In their post-bad boys middle age, the Stones have become something that even they probably never envisioned: reliable professionals. Comes with bonus material from the rehearsal on the 20th of September