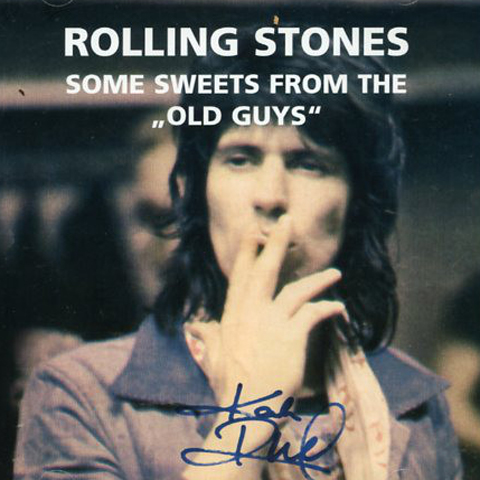 Rolling Stones –Some Sweets From The Old Guys cd

The 70s started a bit rough for the band as they retreated from the spotlight after the tragic death of a black man during a Stones concert at Altamont Speedway in December of 1969. During the hiatus the band released the live album Get Yer Ya-Ya’s Out! in the fall of 1970. A three month European tour began in late August of 1970 and was followed by a UK tour in March of 1971. The album Sticky Fingers was released this year and following its release, the band retreated to France in tax exile, where they shared a house and recorded a double album, Exile On Main Street, which was released in May of 1972. After the release the band went out on a two month tour through Usa. A full world tour wouldnt take place until 1973 after the release of their number one album Goats Head Soup. Now the band had three top selling albums in a row and these albums consistently topped the US and UK charts. But the band was also facing legal battles concerning drug use, which made for an interesting international touring schedule as they were denied permission to play in a couple of countries. With great music and controversy swirling around them, The Rolling Stones were one of the hottest rock ‘n roll bands at this time. In September of 1973 Don Kirshner left the American TV station ABC’s In Concert series to launch his own Rock N Roll show called Don Kirschners Rock Concert and he knew that his series had to start off with a bang and The Rolling Stones was the band to help him do it. So the opening show featured a London performance, taped in the summer of 1970, by The Rolling Stones – their first appearance on American television in over four years. It was an unforgettable performance where they performed an unforgettable and emotive version of Angie. This show can be found on this album. In 1974 they released another 1 on album Only Rock N Roll, an album that would be the last with Mick Taylor. On the 1st of June the Stones hit LWT studios in London to shoot some promo films with director Michael Lindsay-Hogg. The band recorded three songs Ain’t Too Proud To Beg and Till The Next Goodbye which both featured live vocals on prepared backing tracks and It’s Only Rock’n Roll which was a different take prepared exclusively for these promo recordings. This promo shooting can also be found on this disc. So besides these two sessions we have rehearsal material from Switzerland in 1972, a studio version of Shine A Light as well as a live version of Brown Sugar from Madison Square Garden in New York, which was the first show on their 1972 tour.