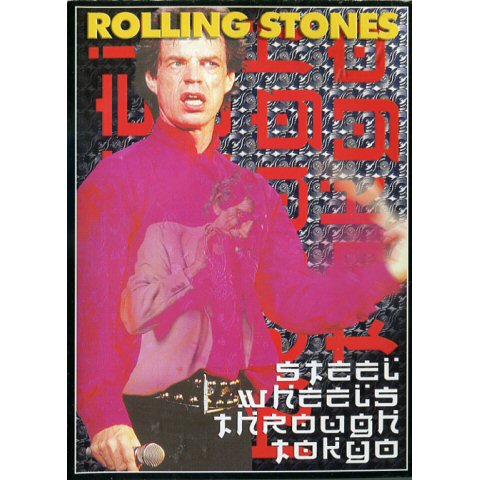 The Stones had only been “retired” for three years between the releases of the dud Dirty Work in 1986 and Steel Wheels in 1989, but in those days, that was a pretty long period of inactivity for the band, especially since they’d been off the road for a lot longer than three years. When they got back on it for an international, big production tour, they were in danger of playing back up to the giant sets, fireworks, and inflatable monster hookers that dwarfed them onstage. Of course, Mick Jagger is not a performer who’d allow himself to be upstaged by a balloon, and though the new material was hardly the return-to-form that a lot of critics cried it was at the time, he still managed to put on a hell of a show. Sure, the act had essentially become cabaret, but it was some very crowd-pleasing cabaret, and the resurrection of long-dormant sixties chestnuts like “Paint It Black”, “Ruby Tuesday”, and “2000 Light Years from Home” (performed on stage for the first time ever) were wonderful surprises. Fairly early in their tour, the Stones visited Japan, and their reinvigorated state is well captured on this Steel Wheels Through Tokyo dvd, recorded on the 26th of February at Tokyo Dome. This presents a pretty nice illusion of a band in their prime ripping through nasty stuff like “Sympathy for the Devil”, “Tumbling Dice”, “Happy”, “Midnight Rambler”, and even “Harlem Shuffle”, which sounds a hell of a lot more vital here than it did on Dirty Work. Although dated synth sounds sometimes get in its way (ugh…those “pan pipes” scurrying all over “Ruby Tuesday”), the poppy and psychedelic material also contributes to the feeling that these guys are younger than they were at the time. The 47-year old Mick and Keith look so much younger in this movie than they do today. Jagger’s act is relatively reserved compared to some of his more cartoonish antics, though you might want to do yourself a favour and look away from the screen when he starts doing a naff version of tai chi during “2000 Light Years from Home” and stick your fingers in your ears when he starts doing his misogynistic asshole routine during the bridge of “It’s Only Rock and Roll”. Overall it shows that this band could still hit hard despite the synthesizers, balloons, tendency to finish songs with a show bizzy flourish, and Jagger’s occasional embarrassing pose.