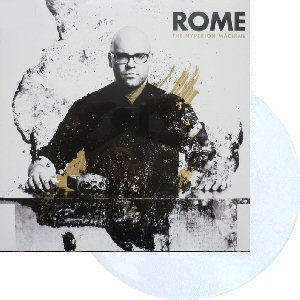 Exclusive Swedish edition on clear vinyl with the entire album on cd as bonus. Limited 300 copies

Rome’s 2016 album is titled “The Hyperion Machine” and its something holistic, like between the eternity and the instant, between whispering and shouting. Romes narrative amost turns it into a radio play, and there is nothing that is not allowed in this music : rock, jazz, classical and spoken word elements come together to tell a story, all in the spirit of Romes mixture of dark folk and post-industrial Wave. In addition, the Scandinavian fans will be delighted to find that the album also features a duet (Stillwell) with legendary Swedish singer and friend Thåström. Rome was founded in November 2005 in Luxembourg as a main output for the songs of Jérôme Reuter and was signed to Cold Meat Industry in early 2006. Rome later signed to Trisol records