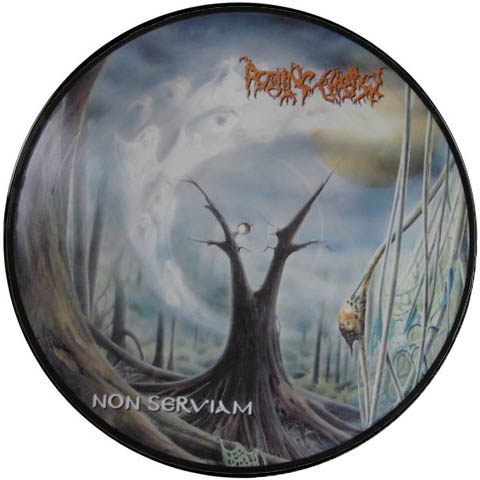 Rotting Christ continued to refine their distinctive extreme metal sound (part black, part death, part anyone’s guess) with their second full album, Non Serviam, which, above all else, seemed to relinquish much of its already impressive predecessor, Thy Mighty Contract’s tendency towards accelerated tempos. Sure, certain songs (“Where Mortals Have No Pride,” “Mephesis of Black Crystal,” “Ice Shaped God”) still boasted occasional breakouts into blastbeat-driven insanity, but those moments were summarily overshadowed by a new breed of mid-paced standouts such as “The Fifth Illusion,” “Saturn Unlock Avey’s Son,” and the title track. With their surprising show of restraint, multitude of masterful, glacial riffs, and — in the case of all-time extreme metal benchmarks, “Morality of a Dark Age” and the simply spectacular “Wolfera the Chacal” — quasi doom passages, these more deliberate experiments only threw the Greek band’s unforeseen instincts for conjuring positively sublime melodies into ultra sharp relief. And, by doing so, they paved the way for Rotting Christ’s arguable career summit via 1996’s Triarchy of the Lost Lovers — although Non Serviam is probably just as deserving of that honor.