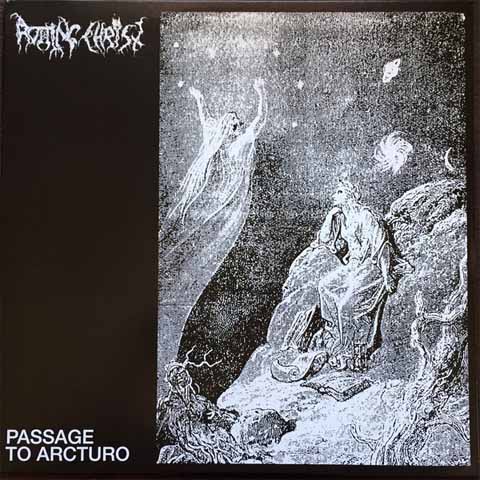 This is Rotting Christ’s first EP and it was this release which gained them exposure in the greek underground circles. Passage to Arcturo is somewhat enjoyable, and it very clearly sews the roots that the band would later perfect through albums like Thy Mighty Contract and Triarchy of the Lost Lovers. The use of airy, ethereal keyboards against the march like step of “The Forest of N’Gai” or the graceful, lamenting guitar melodies of “The Mystical Meeting” lends credence to the band’s epic riffing syntax. Themis’ (aka Necrosavron) drumming leaves something to be desired, with only the simplest of beats being laid out against admittedly primitive riffs, but in truth its the boxcar production that gimps the beats more than any lack of skill. The bass is interesting, especially “Inside the Eye of Algond” where it trails off merrily against the muted rhythm guitar. But the tone is a bit too plunky. Really, the entire EP sounds as if it were being played at you straight in a rehearsal room, with the band lacking for the viral energy of their later accomplishments, but this is the worst thing I can say for it. The lyrics are cool, especially “The Old Coffin Spirit”, but the riffs are usually hit or miss territory. Once or twice in each of the (longer) metal songs, the guitars and keyboard will flow into something wondrous that sparks the imagination, but this material is not without its weaker, filler segments. The first two full-lengths are hardly shining examples of production, but both are able to develop the ideas here into more tangible tracts of immersion. Passage scrapes by for its nostalgia, and for its important place in the Greeks’ inevitable, inescapable pantheon of ideas, but its been surpassed time and time again.