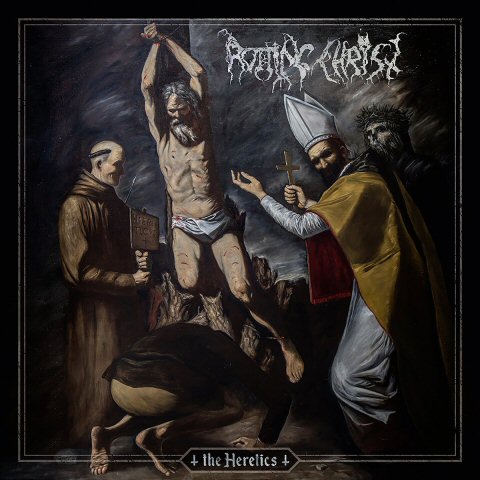 Black vinyl with gatefold cover and a 4 -page insert

It’s been over a decade since Rotting Christ shifted its focus away from the raw and bestial sounds of their early year demos and 1993’s debut, Thy Mighty Contract. As long as the core of the band—brothers guitarist/vocalist Sakis and drummer Themis Tolis—has railed against, refuted, and rejected organized religion and explored spirituality, paganism, and independent thought, Rotting Christ has stood for a combination of nuanced luxury spun like a helix around black metal via goth rock, melodic death metal, martial anthems and (if you listen closely) smidges of crotch-hugging hair metal. The Heretics marks the band’s thirteenth full-length on which they continue down the path they’ve carved. There’s no resting on laurels here. Instead, it’s about exploring and expanding upon what has been built over the course of a lifetime (or at the very least, the last six or so albums). There’s a spoken word line in the closing seconds of “Heaven and Hell and Fire” that spells out the album’s topical focus. When Sakis Tolis intones in a deep baritone “I do not believe in the creed professed by the church…my own mind is my own church,” he essentially sets the thematic tone. Rotting Christ has reacted to religion by historically placing a boot on its throat; that symbolic imprint digs a little deeper on The Heretics. Hailing from a country in which 98% of the population proudly and loudly identifies with an orthodox strain of Christianity, you can understand their adherence to a continuing battle with the church, even if to us as listeners, the topic seems like old hat after so many songs written and albums released. Sure, a couple of the songs towards the record’s back end could have been made denser and employed more layers, but one man’s yearning for available space to be filled by expertly phrased, blackened Sunset Strip guitar solos is another man’s expression of gothic, anti-religious atmosphere. Plus, it’s not like these showings of restraint drag the album backward. To the contrary, The Heretics is a statement of forward motion; maybe not sweepingly so, but strong enough to get very excited about it.