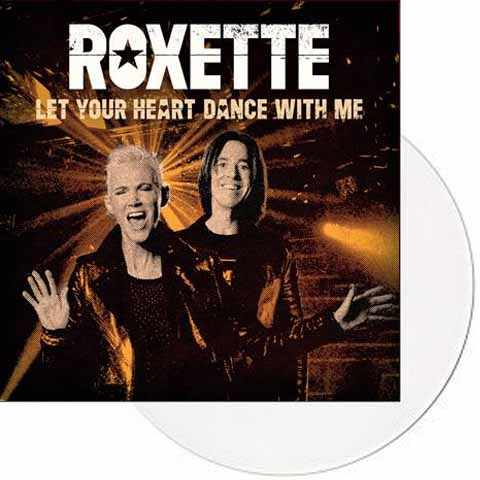 Roxette ‎–Let Your Heart Dance With Me 7″ [white]

Thanks to songwriter Per Gessle’s prolific flow of tunes, classic Swedish pop group Roxette always had a surplus of material to choose between for their albums. Many of these leftover songs were actually strong contenders for inclusion, and their quality has made them loved among fans when they’ve popped up as bonus material on singles or compilations. This was the case up until the release of Roxette’s final studio album ”Good Karma”, which in the summer of 2016 yielded a couple of songs that wasn’t needed for the album. One of them was ”Let Your Heart Dance With Me”, which actually is one of the last reccordings Roxette ever did. I wanted to write a classic and simple ”clap your hands and stomp your feet” song, and ”Let Your Heart Dance With Me” came out of it. I liked it already in the studio, but as usual we already had so many strong contenders that it had to wait for a second chance. And when the idea for this project came up, it was a given. Gessle gave ”Let Your Heart Dance With Me” to mixing maestro Ronny Lahti, who some two decades ago gave the Roxette album ”Room Service” its characteristic pop shimmer. The result now is a song that radiates summer, sun and optimism—despite being recorded during a time when Marie was on her final days with Roxette due to increasing health problems following her cancer treatment a decade earlier. Just a couple of months before ”Good Karma” was released, Marie’s doctors advised her to quit touring for good. We cancelled the Summer tour and all future commitments. But even a studio recording was demanding for her. She wanted so much, but really had to fight to get it out. And she did. Marie was a real trooper to the very end, Per Gessle says.