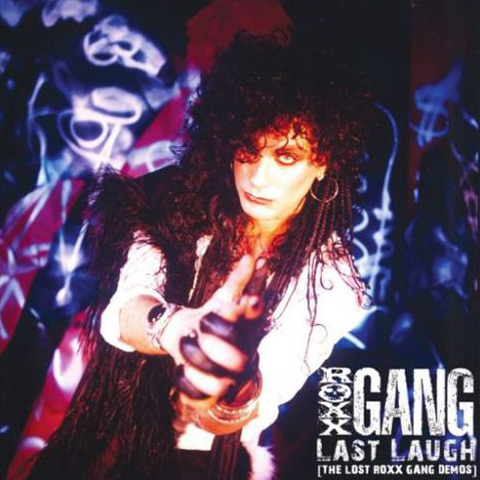 Roxx Gang were easily the most underrated, misunderstood band of the late 80’s and early 90’s. If ever there was a band that should have attained superstardom it was Roxx Gang, Virgin Records first American hard rock signing. Unfairly lumped in with the whole hair band scene, Roxx Gang truly had the makings to become one of Americas greatest rock n’ roll bands. And for one glorious moment… they were. Their cult classic first album Things You’ve Never Done Before was a rock n’ roll tour de force that had about as much in common with the L. A. hair wimps as a hungry shark does to a bowl of goldfish. Their incendiary live shows are still talked about today by those lucky enough to have witnessed them. Roxx Gang Last Laugh (The Lost Roxx Gang Demos) features rare demos and it also features the original Roxx Gang guitarist and co-founder Eric Carrell who died in a mysterious accident in 1986. Eleven of the fifteen track were recorded from 1984-86 when singer Kevin Steele and Carrell founded Roxx Gang writing and recording these demos that include the original versions of Roxx Gang classics like Scratch My Back, No Easy Way Out and Too Cool For School. These are Roxx Gang’s first demos, some of these are close to thirty years old and as a result the audio quality on some songs leaves something to be desired but the point is to pay tribute to my dear friend and co-founder of Roxx Gang, Eric Carrell. He was taken from us much too soon and so few recordings exist of his playing that I felt this disc was necessary. This is not meant to be the new Roxx Gang album it is a labor of love paying tribute to a great guitar player and a good friend, said Kevin Steele. Among other highlights the album includes a cover of the Alice Cooper classic I’m Eighteen that was recorded live in the studio. The songs were all recorded at Morrisound Studios in Tampa, FL with Jim Morris (Savatage, Iced Earth, Warrant and Trans-Siberian Orchestra) engineering the sessions. After recording these demos Roxx Gang exploded on the world music scene in 1988 with their classic demo-album Love Em And Leave ‘Em as a hybrid mixture of rock, blues and punk that virtually defied classification. Love ‘Em And Leave ‘Em earned stellar reviews on both sides of the Atlantic, out selling Guns-N-Roses and Whitesnake in their hometown (Tampa, FL), and earned Roxx Gang a spot on the Top Ten Heavy Metal Albums Of The Year in Tower Records Pulse! In a short space of time the Gang did a series of showcase gigs, garnered a huge international following, and were signed to Virgin Records to be that labels first hard rock band. Their debut, Things You’ve Never Done Before, went on to sell over 250,000 copies.