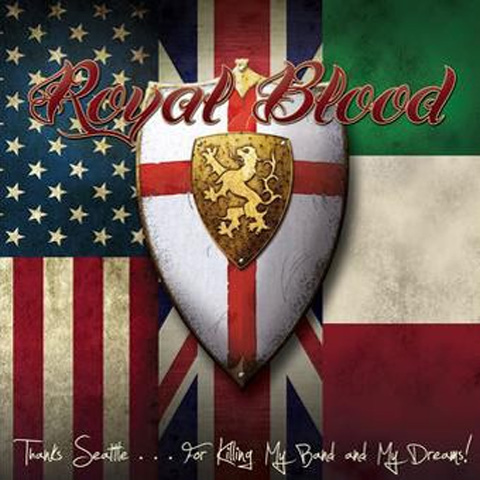 After turning down numerous recording contracts back in 1991, Royal Blood and their lost recordings finally get their due release. Royal Blood consists of world renowned guitarist and two time Grammy nominee Alex Masi, Billboard chart-topping songwriter and bassist Rocky Newton (MSG, Lionheart) and vocalist/frontman extraordinaire Eric Golbach (Craig Chaquico, WWE, The Aqua Nets). The album, Thanks Seattle…For Killing My Band and My Dreams, contains 16 majestic tracks of pure pleasure and pain. Thanks Seattle…was what every great hard rock hair band was doing in the late 80’s and early 90’s, only a million times better and more technically proficient. This album would’ve been a staple at MTV and these cross-continental players would’ve been household names. This was 1991, and the hard rock hair band genre was in full effect. Royal Blood felt that they had time to listen to all the offers and entertain all comers to the table. At the time, and unbeknownst to the band that a Seattle thing was on the horizon, they all forged forward with this truly high-energy and extremely talented band. Lead singer, Eric Golbach was receiving offers to sing for the likes of Peter Criss (Kiss), Brad Gillis (Night Ranger), and Jennifer Batten (Michael Jackson). Rocky Newton had just recently played a part in the success of Def Leppard’s Pyromania and Hysteria albums. And Alex Masi…well he was doing what Alex Masi does best, playing guitar like nobody’s business and garnering nominations for Grammys. The title (Thanks Seattle…For Killing My Band and My Dreams!) playfully mocks the story of how Seattle came out of left-field and almost overnight made the beloved hard rock/heavy metal scene defunct; at least as it played out on MTV and radio. Headbangers Ball was history and so were many of the bands who pioneered the genre. However, this does not deny that Royal Blood had been working hard and recorded what would’ve surely been the next gem on the billboard charts. So what does Thanks Seattle…For Killing My Band And My Dreams offer the fans of quality hard rock and heavy metal music? Well, for starters, some of these tunes were songs that Rocky Newton had been working on for future MSG projects. So there is no denying that there is a strong MSG influence, and even a Def Leppard influence. This album will also be a huge surprise for those fans of guitar virtuoso Alex Masi as he shreds through solo after blazing solo in this 16 track masterpiece. With only one ballad on the entire album, Thanks Seattle… is a tirade of melodic anthem after melodic anthem. Every song sounds like it belongs in a big arena show. For those fans that like big, over-the-top melodies, smoking guitar solos, and soaring vocals, this will be the album that keeps the flame flickering.