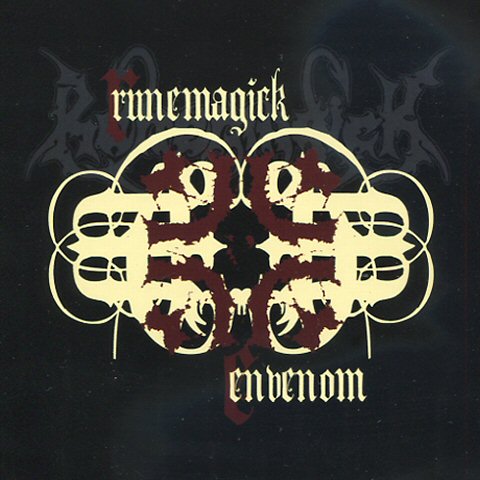 While remaining firmly underground and mostly unheard of, Runemagick has spent the nineties forging an ever more potent and authentic style of death/ doom metal. Envenom breaks the trend of Runemagick’s steady progression, relinquishing most of the groove and drive of the previous two albums and sounding like a different band compared to anything before the album ‘Darkness Death Doom’. The album is an hour of music split into five songs (between eight and fifteen minutes long), with the usual intros, outros and interludes ditched in favour of more explorative and less fragmented music. This album feels more like the combined work of three musicians rather than a symbiotic merging of instruments. Compared to the throaty, chugging sound of Darkness Death Doom and On Funeral Wings, Nicklas brandishes a desiccated, funereal tone that is less welded to Emma’s bass and Mojjo’s drums, instead groaning overhead with the terrible splendour of some ancient winged beast. The slower tempos actually mean that Mojjo is freed up somewhat, and across the album he indulges himself with concise, punctual fills and rolls that generate a more colourful backbone than most doom this slow would feature. Emma meanwhile is left to her own devices, and no longer constantly complementing Nicklas, she owns entire areas of the record, enveloping them with the pall of her sombre, distorted bass guitar. There is a strong stoner influence on the album; previous Runemagick albums are excellent talking material, but Envenom actually starts to sound more in common with something that fellow Swedes Ocean Chief (with whom Runemagick would later collaborate on a split album) might do. While never achieving the same heaviness as the aforementioned Vikings, the song structures on Envenom consist of drawn out, repeated sections that seep into each other almost without it registering, creating an intoxicated, at times even sleepy environment (if it weren’t for the ever fearsome growls from Nicklas, that is.). Accordingly, the guitar riffs no longer manifest as crushing post-death metal ogres, but as repetitive humming discharges of feedback. The hypnotic amalgamation of imposing death/ doom leads and stoned, swaying riffs peaks with the closing ‘Maelstrom’, a masterwork amongst the band’s many achievements. In true Runemagick “current era” style, the tracks all run into one another; if you aren’t particularly concentrating on which track is on, this album flows like one enormous piece of music. The songs revolve around central themes, with more pressing riffs occasionally accelerating the song forwards, before it drops back to the initial motif. Extensive ambient sections create the stoner doom mood, but sections like the middle of the title track see more recognizable riff patterns emerging, and Mojjo’s drumming beginning to pick up the pace. Since Runemagick aren’t concerned with creating despondent, lamenting doom, the listener does not become distracted by their personal, emotional response to the music and instead can become fully submerged in the monolithic creations found on Envenom. Instrumentally, Nicklas is less dominating than in the past, and with his vocals used much more sparingly to make room for extensive instrumental passages, the bass and drums have more room to breathe. Envenom is a natural-sounding jam session that takes the form of dark and suffocating doom, a gateway to the band for stoner and sludge ’heads, and an understatedly grandiose expansion of the existing Runemagick formula, setting the scene for their next two full-lengths. It doesn’t have the brute power of Darkness Death Doom, and although it is more consistent than its predecessor in terms of a unified sound and structure, it takes a lot longer to comprehend and appreciate. This is an unprecedented approach to bridging death/ doom and stoner metal, and is creatively the most pivotal album Runemagick’s discography. This should be recognized amongst other classics of death/ doom, but then, most of Runemagick’s albums should be.