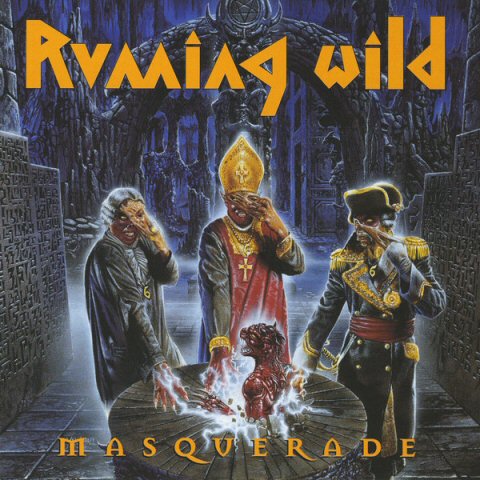 Masquerade, one of the more controversial albums in Running Wild’s catalogue. If any average listener were to explore the vast, wonderful backlog of the German speed metallers exploits, they might be hard pressed to explain why this album is such a big deal to so may fans of the band. Well for some reason, a few folks seem to feel like this is the album where they fell off the wagon and began to stagnate. There aren’t enough words in the English language to accurately express how much I disagree with that sentiment. One reason I’ve been given is that this album marked the precise point they ran out of ideas and just started ripping themselves off senselessly. The truth of the matter behind that is that this is simply a continuation of the style they were playing on Black Hand Inn, which was a continuation of Pile of Skulls, which was a continuation of Blazon Stone, et cetera and so forth. Running Wild had this amazing ability to write albums that didn’t sound too different from one album to the next, but worlds apart if you look back a mere three or four albums. They were always changing, ever evolving, and this is one of the traits that made them such a special band. Why this particular album catches shit for doing what literally each and every album before it had done, I’ll never understand. So to counteract my claim of logical continuation, this is also the album where Rolf starts reaching back and combining past efforts with his new ambitions. For example, tracks like Soleil Royal, Black Soul and Wheel of Doom could have easily fit on Black Hand Inn with their similar riff ideas and slight power metal tint at times, whereas Men in Black, Demonized and Rebel at Heart carry a more hard rocking and traditional heavy metal bent than the others, sounding akin so something that wouldn’t be out of place on Blazon Stone, and still we have tracks like Underworld, Lions of the Sea and Masquerade that are straight up speed metal through and through and really would have sounded right at home on Pile of Skulls. So yes, I can concede that Masquerade explores less new territory than previous efforts, but I counter that it’s a beautiful amalgam of what made the last four albums, (and really, their entire 90s era) so great, while still pushing forwards into new territories. Really, every trademark of Rolf and crew are still just as mighty as ever, no matter what people may try to tell you. I will admit that the album slows down a bit too much when the band takes their foot off the gas on tracks like Demonized and Rebel at Heart, which are still good songs, but don’t much fit with the high energy tempo of the rest of the album. I’ve always found this to be Running Wild’s Achilles heel, to be honest. The tracks that are less speed metal and more traditional/hard rock never seem to be as captivating, regardless of how awesome Rolf makes the chorus (like Rebel at Heart). It’s really only a small bump in the grand scheme of things, fortunately. I can’t help but feel like the popular opinion of this being the band’s turning point is completely and utterly wrong. Every element that made the band special is still abundantly clear and the biggest difference between Masquerade and the fan favourite of Black Hand Inn is that the former is more direct and less epic. Whatever story is being told here takes a back seat to a collection of hard hitting and exceptionally catchy heavy/speed metal, and that’s exactly what Running Wild is best at. I wouldn’t change a thing.