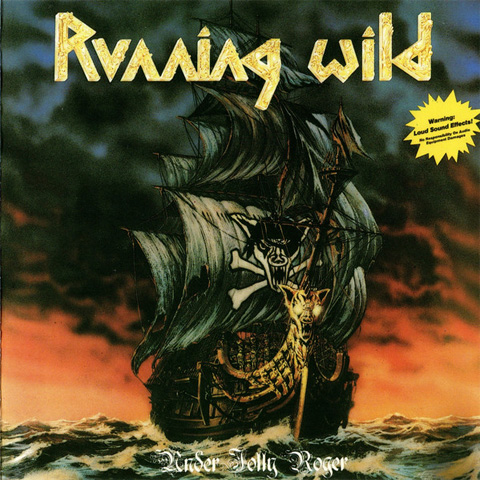 Reduced price due to small hairline marks on cd

Germany’s Running Wild continued their conquest of the metal world after some extensive touring, with Mötley Crüe among others, with this their third album, Under Jolly Roger. Now, we all know about RW’s pirate image, and this was where it started. Even though only the title track (and arguably also Diamonds of the Black Chest) featured lyrics about the sea raiders, the album’s cover art and the music itself omitted a distinctively piratey feeling. The lineup for this album was the same as on its predecessor Branded and Exiled. The rhythm section, consisting of the RW veterans Stephan Boriss on bass and Hasche on drums, still didn’t do much more than provide what was necessary for the music. The guitarists, however, Rock N’ Rolf and Majk Moti, really got their shit together on this album. Mostly every song features some great soloing, many times by both of them at the same time, and of course some pounding riffs, since these were one of the most important ingredients in Rolf’s recipe of success. The album starts off with some cannon-fire, leading into the most classic RW song ever, the song that defined the term pirate metal: Under Jolly Roger. Its irresistible groove and catchiness grabs you right from the start, but the music isn’t even close to sounding like anything they’d done up to that point. Well, it really doesn’t get more metal than this. The production is pretty damn unpolished and heavy, and the guitar tone breaks bones, which is appropriate, since this is probably the band’s most riff-oriented album ever. If you only need a few Running Wild albums, you can very well get this one. It’s not their best, but they hit the big time with it in many places of the world, and not without a reason. Running Wild’s golden era had just begun.