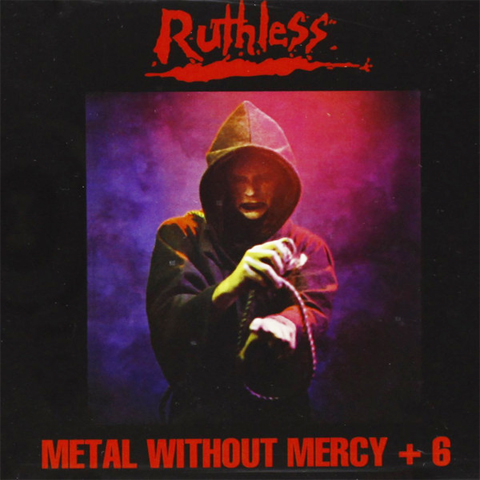 Southern Californian heavy metal band Ruthless was formed in 1982 and they released a Bill Metoyer produced five-song EP called ‘Metal Without Mercy’ through Iron Works Records in America, Banzai in Canada and Axe Killer in France. European editions sported different artwork. A full-length album, entitled ‘Discipline of Steel’ recorded by Ethan James and Ben Jackson at Radio Tokyo, Venice in California, followed in 1985. Ruthless are one of those classic US power metal bands that seemed to stick to a more traditional route, rather than some bands like Liege Lord that would take a more epic and mysterious approach to the developing genre. Rather than comparing this to the likes of Omen, Liege Lord, Helstar, Griffin, and so forth, I’d say this is more along the lines of Jag Panzer’s Ample Destruction, Cities’ Annihilation Absolute, and Stormtrooper’s Armies of The Night EP, to name a few. This is pretty straightforward stuff but still with a nice amount of quality. Not quite over the top and filled with majestic atmospheres or anything, but still heavier than regular heavy metal bands, while also not falling into the thrash explosion at the time. Vocals are really comparable to Cities but not quite as tough as Stormtroopers. Don’t expect shrieking here, instead vocalist Sami De John has a more rough tone to his voice and usually sticks within the mid-ranges. You could also say the vocals here are pretty similar to J.D. Kimball’s singing on Omen’s early material, though De John sings a bit faster and has a slightly more simplistic singing style. In the end he sounds perfect for this kind of style and is a nice highlight here.