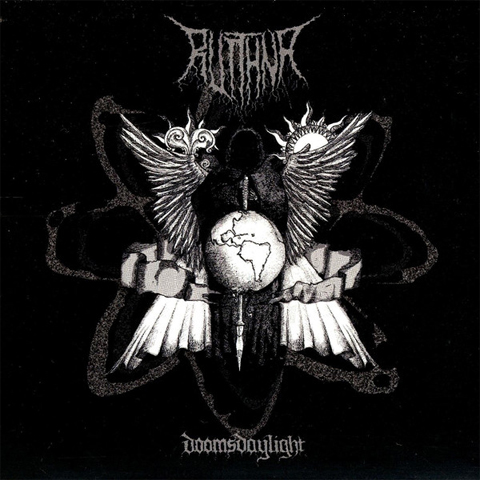 Rutthna is a little known Swedish black metal band, whose name minus the letter ‘h’ means rot in Swedish. An oddly appropriate name considering the style of black metal they play. Rutthna’s music is a potent mixture of early Darkthrone (circa A Blaze In The Northern Sky) style frigid groove with very unique epic touches. The songs range from grooving monsters reminiscent of Darkthrone’s In ‘The Shadow Of The Horns’ like the title track, to more melodic and depressive compositions like ‘The Fifth Angel’, or the atmospheric, slow burning fury of tracks like ‘Daughter Of Chaos’. The technical skill of this album is surprisingly high. Drummer Dennis Ekdahl keeps some very interesting rhythms, such as the odd galloping cymbals of ‘Season Of Huge Mortality’. Also noticeable is his lack of blasting; quite refreshing in the age of endless speed and brutality. Joakim Kristensson (better known from viking metallers Thyrfing) handles the rest of the instruments and vocals, playing some great riffs, full of passion and despair. Most noticeable might be the heart wrenching guitar work of ‘Daughter Of Chaos’, before it moves into its apocalyptic death-march that fits the album so well. His bass work is also commendable. Simple, yet oftentimes refusing to follow the guitars, it creates some interesting counterpoint melodies that work quite effectively in constructing atmosphere. Vocally, his performance is above average, resembling a more brutal Nocturno Culto. However, the atmosphere of this album is what carries it. The compositions to be found on this album conjure images of the four horsemen of the apocalypse riding towards Megiddo to conjure the inevitable doom of humanity. Unrepentantly grim and dark, the sounds of this album are stunningly enveloping, as if trying to strangle you with the inky blackness of their misanthropic melodies. The production helps the album enormously in this respect: very lucid and balanced, with an enjoyable emphasis on bass that gives the compositions even more weight than they had before. Overall, Rutthna’s debut album is a very promising start for this young band. If they can shake off some of the heavy Darkthrone influences and consolidate their unique sounds, they might be one of the best black metal bands in a few years. A spectacular release for fans of black metal, be they raw or melodic.