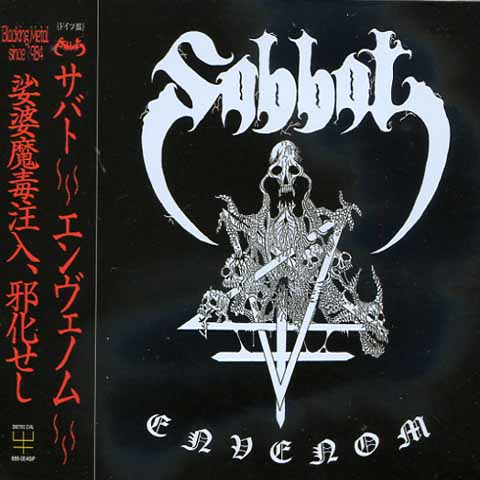 The band started in Kuwana in 1983 under the name Evil something that was changed in early 1984. The foundation for their history was laid and during the autumn Sabbat delivered their hard, raw and fast metal spiced with Venom covers to the audiences in their hometown of Kuwana and the surrounding area. In April 1985, Sabbat recorded two songs for their first single. The single was released by Gezol’s own record label Evil Records and the pressing was 300 copies. The band released four more singles and a couple of demos to score a record contract and the band went into the studio in October of 1990. The band started to work on Envenom with Elizaveat doing the guitars. The recordings were almost finished when a guy called Temis Osmond was discovered and it was soon clear he was the guitar player Sabbat had desperately been looking for. Temis Osmond played a couple of solos on Envenom and although in the album credits he is mentioned only as a special guest he was a full member replacing Elizaveat when the album came out on Evil Records in 1991. Envenom is quality early black metal, more similar to the groovy/traditional Venom, Bathory, and Celtic Frost releases. Certain songs, like Satan Bless You and Reek of Cremation, are straight up neck breakers that have nothing to do with the cult and necro aspects that are associated with the second wave and beyond. There are influences of a lot of different genres found here, from punk to plain old rock and roll, and it works. The vocals are effective; imagine a raspier Cronos with some Sarcofago and even Macabre type styles mixed in (check out the middle of Sixth Candle). Guitars are solid. There is some great soloing on this disc, especially on the faster speed songs like Sixth Candle and Carcassvoice.