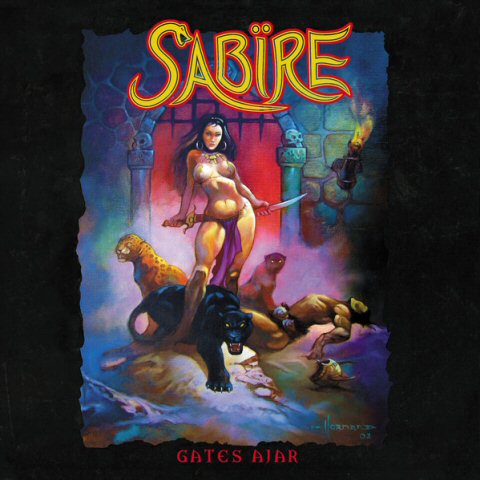 It’s been a while since I’ve been so genuinely confused and pleasantly surprised by a band, yet here I am. This is the debut album from the Canadian act Sabire who claims to be a Pure Concentrated Acid Metal band. Now if there’s anything I’ve learned in my time in metal it’s that random made up genre tags are usually a bad sign, but one listen is all I needed for the doubt to melt away. The music on Sabire’s Gates Ajar speaks for itself and clearly I’m not the only one entranced by it – less than two weeks after their debut, and the band is already signed to play at Keep it True 2019 (KIT). Gates Ajar is a new twist on old favourites – Sabire’s sound is rooted in the punk infused style of bands like Motorhead, but with a much easier going and uplifting vibe to the music. It’s traditional heavy metal that’s a cross between Tank and High Spirits / Professor Black with tons of catchy vocal hooks and all the right attitude. As one would expect from a band taking heavy influence from Tank and Motorhead, fast paced lead guitars are at the forefront. Scarlett M.’s riffs are up-tempo and fun, with plenty of moments tastefully harkening back to Ace of Spades. Scarlett is the star of the show here as he also handles the bass, vocals, and small keyboard touches throughout the EP. His talents as a multi instrumentalist shine through as each piece of the instrumentation melds together so well. Scarlett is accompanied by Paul Corben on drums who serves as a perfect compliment to the live fast and free, old school style of the guitars. I’ve mentioned comparable, older bands plenty of times already in this review, but I want to make it clear that Sabire aren’t just a carbon copy of our heroes. The music here has an identity of its own thanks largely in part due to the vocals. Scarlett knows how to craft catchy vocal melodies that when combined with his uplifting, carefree approach to singing just make you want to smile. Overall, the music is straightforward, but very well executed with virtually no dips in quality for the entire runtime of the EP. Tying it all together is a dirty production straight out of the 80s with the sleazy lyrics to match – perfect for the mood. Sabire are a nice surprise that serve as a reminder of why you shouldn’t always judge a book by its cover. Despite the interesting, off-kilter aesthetic, this dynamic duo proves that they really have a really solid grasp on what makes metal music memorable. I have no idea what “pure concentrated acid metal” is really supposed to mean, but if it sounds like Gates Ajar then sign me up.