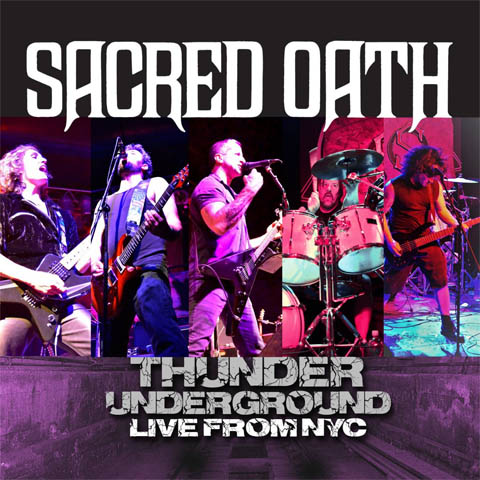 Bethel, Connecticut’s Sacred Oath just keep on going and getting better and that’s never more evident than on their live album, Thunder Underground, which delivers an epic reinterpretation of the bands brilliant studio work. As lead singer and guitarist Rob Thorne explains, This album pretty much fell in our laps, I mean, we had no intention of recording a live album on this tour and we went into that last show without any idea it would be recorded. We had no soundcheck that night! But I guess that’s the beauty of technology… the soundman had a laptop hooked up to the board and recorded the whole show. Handed me a thumb drive at the end of the night. When I first heard it I thought “wow, the band is so high energy, especially for 2 in the morning! We gotta put this out there.” With such a long and accomplished career, it’s not like the group didn’t have enough good material for a live recording. With 34 years of history and ten studio albums behind them, Thunder Underground includes only the very best of the best of fan favourites. Sacred Oath have been carving their own path ever since they began with their 1988 debut album, A Crystal Vision, considered a cult classic staple of American power metal. Many albums and tours have followed and although much as changed since the members of Sacred Oath came together while still in high school, much has also remained the same. In the thirty years since their debut, the group has consistently delivered their solid, unmistakable brand of metal that has resonated with people around the world. If you want to hear the most real version of Sacred Oath yet, then Thunder Underground will give you just that. As Thorne also explains, “What I appreciate most about this album is the raw emotional honesty of it; the realness of it. The studio has become a dehumanizing place these days. Everyone suffers from overproduction, especially metal bands. But Thunder Underground cuts through all that with a purity that can only be experienced in the sacred moments of live performance.”